Update to my previous...

We just signed an offer to move the SandCastle.  Alas this property does not include the safe door in the previous post.  That one was under contract before I tripped across it so it was effectively off the market.  but now.. though I wasn't looking to move and now we've signed an offer.

*sigh*  This offer is likely only the opening salvo of a very long process... We are a long ways and a lot of work from laying head on pillow there.

The property is missing a huge "need": a garage.  It has a carport but I need to be able to take a car apart, close the door and leave everything without worrying about security.  There is room both on the property and budget to add one pronto.  And since we are building rather than buying, it _will_ be big enough to be considered a shop...  And I'm thinking a climate controlled "reloading room" would be in order.

We are looking forward to  jettisoning the HOA for a slice of freedom!  Wanna park in the yard? The "back 40" is currently unused.  And I can put it and the boat under a "tent-garage" to keep the sun off.  Personally I'm looking forward to putting up an Antenna mast.

Update 01Feb:  They countered (We expected that).  [Is the opening offer ever accepted?]  The counter offer price is lower but still waaay high.  At this point, I'm not sure I even want to counter.  Poking around on Zillow, I found another property (bigger both in land & square footage, newer, already has a garage and at an asking price around where we will end up at buying & upgrading this place, but without any of the hassle of doing the upgrades our self.  It would be a turn key deal.

I'm inclined to walk away or counter with a price lower than our original offer based on what I saw tonight.  This property has been on the market for several months.  It's far from perfect and right on the borderline of "workable" and "bulldoze" and build the house we want.  The only advantage is "closer to work".  But is the difference between a 3 mile commute and 5 mile commute significant?  I bet most worker bees would figuratively kill for a 5 mile commute!

Also, we are under no pressure to move.  We can afford to wait for the right deal. I don't think this is it.

Update 13Feb2016  Seller sprung for an appraisal out side of a signed offer.  Closer to our number but I still think even our number was high.  We are walking away.
Posted by danno at 23:15 2 comments:

I wasn't planning to move...

But then I saw this (it's part of the house):
Found in a Zillow property listing (no link to it to protect future buyer's privacy)...  And it's part of the property!  I don't imagine it opens to house anything like this, but still....  My phriendly purveyor of phine properties tells me this one is under contract, but offered to look for something similar.

So we started to outline our list of desires which quickly became a list of reasons we don't like this house, and dimensions of Robo Cop 2 directives (you have to scroll down a bit to see a partial RC2 list of directives).   So maybe it's time to move.  After all the SandCastle has been at this location for ~20 years which predates the SCSon.  The SandCastle is our family abode, not a fixed location.

Reason's for not moving - we've improved the property in a lot of ways we like...

In less than an hour said phine property purveyor has returned 27 qualifying MLS listings within 10 miles.

Oh crap... an hour ago moving wasn't on the table.  Now it may be inevitable...

I opened up the radio box tonight...and was not particularly surprised.  The chassis felt mostly empty.  Here's proof: 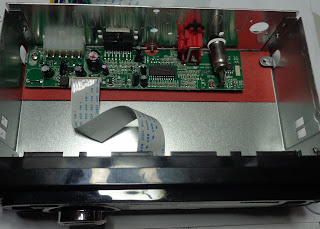 That one board in the back of the case likely *is* the radio.

The antenna hooks in via the silver connector on the right.  The radio chain is likely processed in the black IC with the red stripe probably meant to obscure the IC identification.  I didn't actually look that close.   The IC screwed to the back panel is probably the power amp (20W x 4 channels - The chassis connection acts as a heat sink).  And the teflon connector left is where DC  power comes in and audio signals exit.   The front panel likely has an MCU that interprets button pushes and updates the front panel display.  It also would likely control the radio IC on the main board.

I find it amusing that they felt the need to maintain the 1/2 DIN form factor when they could have saved money and put the boards back to back into only a 1/4 DINform factor or smaller.  Guessing it was too much trouble/not cost effective  to change the chassis tooling!

Hmmm... Now I'm wondering if the "old" radio doesn't have a similar power amp that might easily be replaced for a couple bucks.  AM reception would be worth the bet...  perhaps I should fit quick connectors for the relevant lines for easy swappage.  Stay tuned!

* I do not have any direct knowledge of this radio, save that of a buyer... opinions offered here are that of one in the industry and should not be relied upon with any weight greater than any given person begging on the corner of anytown Planet Earth.
Posted by danno at 23:13 No comments:

... Never park it with anything inside that you cannot afford to lose!

I learned this lesson long ago when someone broke out a window and stole my (expensive to me then) stereo.  Ok lesson learned.  A vehicle is not secure, no matter what.  Never leave anything in a parked car that I can't afford to lose.  If someone want's it bad enough they'll pick it up with a fork lift and take it away on a semi trailer.

Fast forward to today... driving a rag-top.  That means anyone with a knife has "a key" to the car.  And if I lock the door, "forcing" the thief to use the knife to get access to the lock, it's my fault* for locking the door."

Fortunately the march of progress has meant car stereos are almost free.  The last one was $40, delivered.  I can afford to write off $40, just please don't cut the top!  That also has nearly eliminated the profit in stealing car stereos.

Many years later, that $40 radio seems to have developed a fault, I'm guessing in the amplifier section.  Probably an occupational hazard when most of the time it's being driven at 100%  (the scale goes to 42)...  These are the hazards of trying to listen to the radio with the top down at 70mph.

FF to today... The SCSon announced "nothing interesting the Fry's ad today".  "What about a car stereo?" I asked...

But you know what I don't get for $15?   AM reception!  The next least expensive model with AM was nearly 4x at $55.  But you know what?  I have several AM handheld radios and an aux cable..

It's also educational to understand the reason why FM is now easy and AM is hard (when it used to be the other way around).  It's because radios are now mostly digital while they used to be analog.  Analog AM radio was easy-peasy - diode detector stuff + amplifier while FM was harder.  Now it's digital, SDR (Software Defined Radio).  Plug an antenna to one end of the chip...  chip converts RF via an Analog to digital converter... detects the encoding... reconverts to audio and a speaker connects on the other side.  I'm guessing the lower frequencies of AM make it harder? (I don't actually know).

* I'm going to credit this thought to Ms. Tam, rather than claim it an original thought or research the actual link.
Posted by danno at 23:28 No comments: