Temperatures here in the Sonoran Desert are still tolerable but we are about to start the steep climb into serious triple digit territory.  But today held in the mid-90s so we were good to go. 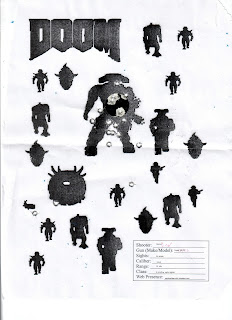 We hit the range with  the mission to shoot some ePostals.  This target was shot with a Ruger 10/.22 with an 8x optic sight.  This is something of an easy call at 25 yards.  OTOH, it's also there to set up an "easy" class to give noobs a good score with scoped rifles.

I kind of expected the 10000 point cyberdemon to be a big draw and if you score, it's worth the 10 shots.  I lost count of my hits and ended up with 12 on target.  Then I went for the BFG-9000 and cyberdemon.  Missed the BFG and only scored 1 on the cyberdemon so no scores there.

If you do the value per shot calculation, and take into consideration the target size, there are some targets well worth aiming for, and some that are not.


BTW, The SCSon is turning into something of a recoil junky.  In his early days he was rather recoil sensitive.  But now with better understanding of shooting and how recoil ties into that, he now seeks it out as something to be tried... and conquered!

Unfortunately this range day had a little more drama than usual.  I was trying to figure out why my 10/.22 wouldn't feed when I heard a range master asking a few benches down "Are you shot?  Are you hurt?"  Then he got on his radio to call for a cease fire "...we've had a gun blow up down here".  Apparently while walking up and down the line, the range master noticed someone sitting back on a bench bleeding enough to cause notice.

We cleared the weapons and held back behind the safe line.

The shooter was ambulatory but obviously in need of some medical attention for a bloody right hand.  "We need to get some pressure on that wound" called out the range master.  The injured shooter returned a few minutes later with the hand wrapped in paper towels from the bathroom.  I am surprised the range didn't have a better first aid kit with at least some sterile gauze.  Then again accidents are rare events.  I mentally reviewed the contents of my bag for 1st aid...  Couple bandaids are probably the best I could conjure.  Felt a pang of regret having been forewarned by other bloggers. (after all, learning from others is one reason for following blogs).  Note to self... procure a reasonable 1st aid kit and keep it in the range bag!

Putting together other evidence, it appears a round went off out of battery.  The SCSon reports he saw a piece of splayed brass and I found a mangled projectile.  I had the camera handy but this is one time I chose not to get the shot.  Blood & gore is not my game.

Sounds like a great time for you and son until the incident.

Accidents are accidents, everybody should always be a boy scout carrying a first aid kit, it really can help.