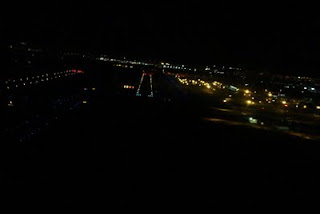 I had thoughts of taking the SCSon out to dinner, but knowing the "night"* time rules would be in effect by the time we were headed home, I checked the logbook and found I was just a couple days past the 90 day limit. DRAT!

Yea, we could still go and chances are lottery odds no one would even ask the question "were you current". The only reason anyone would ask the question is if there were an accident. Like CCW carriers and restaurants serving alcohol. Concealed means concealed and no one would know. But I would know, and that is enough. It's a simple concept called integrity** - do the right thing all the time even when, ney especially when, no one is looking.

This shot shows us lined up for runway 22 Right. 22 Left is clearly visible on the left side of the frame. The set of lights on the left side of the runway is a a PAPI - Precision Approach Path Indicator. (See AIM figure 2-1-5) The set of four lights show either red or white depending on the viewer's angle to the runway. White for high and red for low. A standard 3 degree glideslope is indicated by two read and two white. Slightly above shows three white one red and slightly below shows three red one white. Waaaay high or low shows one color or the other. Just remember "red over red - you're dead". Ok, that's the VASI rule but it still applies here, 'cept x2. e.g. "four red, you're dead." Of course this shot here shows we are on the proper 3 degree glidepath, two red and two white.

* The 61.57 regulation defines it's version of night, that is one hour after sunset to one hour before sunrise in these parts. Tonight local sunset was 6:37pm, Engine start was 7:52 so it was well dark before the flight.

** This is a characteristic pilots tend to exhibit in spades. For example, I once lost my wallet on an airport. It beat me home! That is the message saying "I found your wallet, call me to collect it". Not a thing was missing. My phone number was not in the wallet, but a friend's business card was. The finder called my friend who provided my phone number. Result, My wallet was back in my pocket in less than 6 hours.
Posted by danno at 21:40 No comments:

Courtesy of the Legacy Media. One 'R' and two 'F's. Just like "tariff". 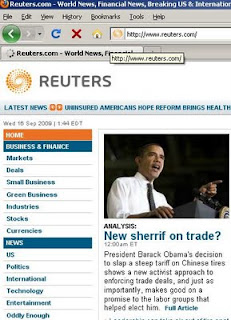 I'm a pretty good speller but a lousy typist and even worse proofreader. But headlines are pretty obvious places to check.
Posted by danno at 22:46 1 comment:

Quoting the SCSon during dinner. To the naked eye, it appeared a bright spot hanging apparently motionless in the early evening sky. After dinner I set up the telescope. As suspected it was a high altitude balloon. 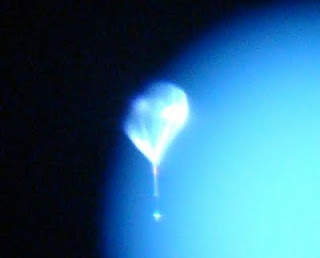 I attempted to get a picture after everyone had a chance to look. Most were blurry due to the camera's auto focus "feature" and I couldn't find the manual focus at the time. Yes, this one is blurry too, but far clearer than the rest.

Update:The balloon was launched from Fort Sumner, NM and carried 11 student experiments. It was over 115,000ft as it crossed over the area. More details here and here.
Posted by danno at 22:02 3 comments: