I really enjoyed the Top Shot series.  More so in the later seasons with the diminished emphasis of "house drama" and enhanced emphasis on the mutual respect and best wishes among competitors.

What respectable shooter didn't think "oooh... I should be there".

I know I did.. for about two minutes before the physical realities set in.  as in, I'm too old and too out of shape to give it much of a go.

IMHO the "All Stars" season was the best of the bunch again for taking the good sportsmen angle rather than the soap opera of the prior seasons.

The November ePostal match is based upon on one of the challenges..  Opening a bottle of soda.  The scenario is that the bottle is strapped to a fixture with a churchkey positioned on the cap.  Your task is to hit the church key without touching the bottle.

I haven't found the exact clip, but if here is the full episode.  The bottle challenge starts at 17:25.

So here is the target.  (download target from the link, not the image below and make sure the  "full size" is selected, not "fit to page") 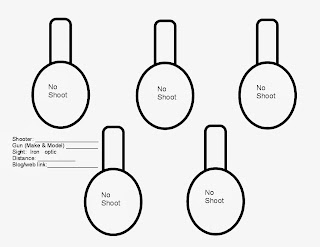 Rules of engagement:
Pistols:  Standing, unsupported.  One hand or two, shooter's choice.  Distance: 25 feet or range minimum, which ever is greater.

rifles:  distance: Air Rifle,10M, rimfire 25 yards, center fire 50 yards.  Standing or off the bench, however off the bench the fore end of the rifle must be supported by the off hand elbow.   Sand bags or any other is disallowed.

two shots at each target.  10 shots per target total, no time limit.

scoring:
a clean hit inside the churchkey, not touching any lines scores 2 points.
a liner that touches the churchkey only scores 1 point.
any touch on the bottle means you broke the bottle and scores 0, glass is very unforgiving is this aspect (including liners with the churchkey).    Final judgement on this is up to the match master.

Additional rules: only two hits per churchkey are allowed, though in case of more than two, the highest two hits will score (benefit to the shooter).  Exception:  In the case there is a hit on a particular bottle, only the best hit on the attached key scores.  Two hits on the bottle zero out any hits on the opener.

Classes..  Just shoot it and let me worry about that.  You can assume the normal caliber/sights/rifle-pistol/Hi-Point carbine matrix as needed. I'll sort 'em out in the final standings.

SOP rules:
1.  Shoot as many times as you want, but only submit your best targets pr shooter per gun.

2.  Mark your target with your name (as you want it published), weapon make & model, distance and sighting system.  Send your target to sandcastlescrolls@msn.com

3.  1:1 "Red Dot" optic sights are faster to align but time is not a factor in this game so they count as "iron sights".

Credit for the concept and original design goes to Billll.   The dayjob(tm) has had me swimming with alligators for the last couple months.  Thanks Billll for the target concept!

Are you thinking "oooh  Oooh, I have a great match idea"?  Contact TrueBlueSam for a slot on the 2014 calendar!  want to host but lack s concept? Billll has two more ideas for the sharing!

As mentioned in the opening, I really enjoyed the TS series..  Heck watchable shows are thin enough as is.  I hope they continue it though it's tough to top what they have already done.

Update 10Nov2013:  No more pizza, but results are posted!
The target has been updated to add reporting details.  Actual targets did not change.  Both old and new targets are acceptable.


In the mean time, Mrs TBS is still serving up pizza through the weekend.   This is your chance to shoot both matches in one range visit.

We have sent in our targets  Have you sent in yours?

Update 30Nov2013:  Reviewing this I do not see an end date.  At the very least targets will be accepted through Dec 2.  But this is also the last match of the year so I am inclined to hold entries through next weekend if anyone still wants to shoot.  I may make even make the request myself as I haven't had a chance to shoot this.  I am hoping to shoot it Sunday if I can get a bench at the range.  Bottom line, soonest entries will close will be 23:59 02Dec2013, but I will extend on request.