Somehow this worked out wrong...

I'm going to let you in on a little secret.  Today is my birthday.  The big five-oh.  The SandCastle crew greeted me with cards and a couple presents.  Nothing much, but then I don't need much.  I pretty much have anything I need.

I headed out to the range to get in a little trigger time with the June* ePostal match. The guy on the next bench had a couple toys out, A Judge, and an Uzi.  Someone came up to talk to him about the Uzi.  Through the earplugs I heard "Yep, I only take it out once a year on my birthday".  I set my pistol down and introduced my self.  He confirmed we share a birthday.  Today he is "fifty-ten" years old.  (Retelling this to the SCSon, he said "I don't understand".  I asked "What comes after fifty-nine?")

Meanwhile the SCQueen headed out and bought herself a car!  I might have joined her but I had this root canal to tend to and given the alternative, the root canal was the better choice.

Wait a minute!  How does that work, it's my birthday and SHE gets the car?  That seems badly broken!

In reality, it was past time to replace her car.  It was 10 years old with a lot of miles on it.  The "Check Engine" light had been on with an intermittent fault.  The light no longer showed.  We suspect it burnt out.  Also, The SCSon, now a 'teen meant the old car was a pretty tight fit for the SandCastle Crew.  The SCSon is probably most happy with the new wheels as he has leg room even with the front seats at the aft stops.  She did well and drove a hard bargain.

I showed up with the pinks on her car we were trading in and ready to write the check.  just showing up torqued me off as there was little parking available.  I found a spot, but one of their cars was parked half into the spot.  I said screw that, I drive a crappy old car, I'm parking there anyway (leaving about 2" clearance to the driver's door).  Explaining this to her sales person they immediately reparked my car UNDER SHADE!

An hour+ later they still weren't ready.  I handed over the checkbook and said "I'm outta here".   My plan for the evening included a) dinner with the family(mongolian bbq), b) pee-wee golf with the family (nothing like pee-wee golf after the sun goes down but the temps are still north of the century mark).  Then home to file my comments to the FAA proposal to drop the 3rd class medical requirement for certain operations.

Turns out they still needed a couple siggies which we did after dinner.  Never made pee-wee golf but I did get my comments into the FAA.

So what did your SO get on YOUR birthday?

* This is the closing weekend for the June ePostal match, meanwhile True Blue Sam has posted the July match.  Get out your .22's and look for a hat on the hoof!  It's a TWO-FER weekend if you act quickly!
Posted by danno at 23:50 4 comments:

Exercising for the sake of exercise hurts.  It's no fun.  I blame a lot of this on grade school PE classes which had us running on wet fields in the Indian Summer as school started.  The humidity (90%+) multiplied the heat (100-ish) and it was really unbearable.  Today it would be considered child abuse.

I always preferred forms of exercise that had an alternate goal.  Growing up my bicycle took me everywhere.  After High School, there was college.  The local community college offered fencing.

Sword fighting.  I liked the idea of that.  What 18 YO D&D player could possibly think otherwise?  Turns out it's also incredible exercise.  Partially because the mind is focused on the battle and tells the body to do what is needed to attack/defend.  The only pain felt in the moment is your opponent's touch on you.  The effects on the body are only made aware afterwards.  (As in we'll see if the SCSon can walk tomorrow.  He feels ok tonight.  But will he be ambulatory tomorrow;-)

It's a little odd in that the lunge makes one leg stronger than the other and that makes you walk with a weak-side lean for a couple weeks.  About three weeks later the body compensates and it feels normal again.

The SandCastle Son found my old foil in the garage and started asking questions.  A google search later turned up a local club.  A visit reveals a phenomenal facility.  In my day we only talked about electronic scoring systems as something you might see at tournaments, never at the local level.  Here they get all electrical for friendly sparring.  The facility has 12 lanes, eight of which are  scoring equipped.  This was inconceivable 30 years ago.

One thing that surprised me was a somewhat lackadaisical attitude towards eye protection.  In my day the rule was never raise a foil unless your intended had a mask on.  This class had a full 30 minutes exercises with sabers up and no eye protection anywhere.  I talked to the instructor afterwards and asked "mind if he wears safety glasses for that part?"  I don't care if everyone else is OK with the status quo.  We each only have one pair of eyes and a careless accident can forfeit one in a heartbeat.

Now I need to get myself involved as well...  A friend got me into "boot camp" class with a local personal trainer a while back. I was in pain the entire duration of the class plus about 6 weeks after I quit.  (nothing against the personal trainer.  I recommend her and will happily pass along contact info it if that's what works for you and are local).  It solved my immediate problem but I couldn't stick with it.  Fencing may be my ticket to better health.
Posted by danno at 05:54 3 comments:

I accidentally deleted the May ePostal results.  Will republish tomorrow when I am in a better state of mind and not making stupid errors.

I wish I could vote for this guy. He's running in AZ4 which is the West side of Phoenix.

Ron is responsible for getting a lot of Arizona's gun laws passed in recent years. (nice shot on the bill BTW)
Posted by danno at 22:22 1 comment: 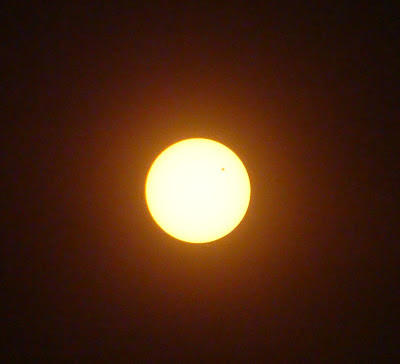 Venus is the dark spot in the upper right quadrant.

The camera is a Sony DSC-H9. It does a lot of things well. However one limitation is that I cannot manually set the focus. In a shot like this, I just want it set to infinity and leave it. I took several shots some of which came out this sharp others definitely less. Suspect the autofocus is to blame.

Trying some of the manual settings. This one is a little better: 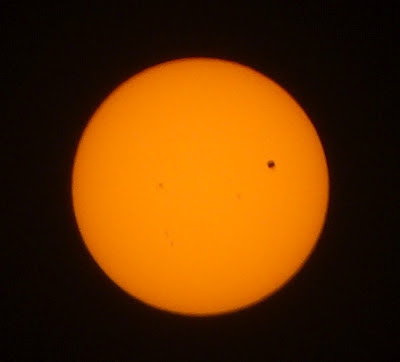 See you in 105 years for the next transit!

Update: I considered the top photo over exposed and much preferred the later and considered replacing one with the other. But in the interest of "naa, it's already published" I left it. A co-worker today vehemently disagreed. "The TOP photo IS WHAT I SAW!" (I ordered in eclipse glasses for the SandCaslte personal use at the prior event and sold off the surplus at cost. There were plenty floating around the plant for this event.) BTW, both images were made at the maximum zoom of the camera (x15). The top image is smaller due to the cropping of the image where I kept the glare from the brighter image.

My co-worker is correct - the top image is what we saw looking through the eclipse glasses. I like the lower better as it's not as over exposed.
Posted by danno at 18:15 1 comment:

Phil at Random Nuclear strikes invites us to shoot some pool. In the meantime the May match remains open through the weekend. So take both targets to the range and make it a two-fer!