There is another option.

Arizona Board of Regents released a study on the costs of complying with SB1474 which would allow guns on the state's three universities.  The bill prevents them from adopting policies to keep guns off campus but allows them to keep guns out of buildings if they put up signs and safe storage lockers. 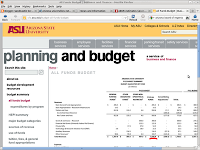 Bottom line they see $13.3M initial costs to put up lockers and signs, with another $3.1M annually to hire more officers.  Lots of money to ordinary mortals but a mere drop in the bucket to bureaucrats used to spending OPM by the millions, billions and trillions.

ASU's budget alone is > $2B.  UofA is probably similar and NAU is smaller.  Together they probably total around $5B.  That $13M one time cost amounts to a quarter of one percent the first year and about 0.06% annually.

But there is another option.  The bill only requires the lockers & signs if Regents insist on disarming the students inside buildings.  They could just let students carry concealed and not have to incur any costs.

The bill really puts a price on their victim disarmament zones.  It would be even better if it made the Regents personally liable as Florida did.

The SandCastle Son had a nothing day at school today  (A day long assembly, no actual schoolwork occurred).  Coincidentally the Yuma Hamfest started today.  It was a gorgeous day: 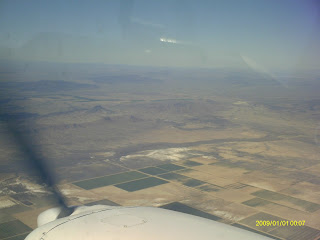 So I took the day off and we flew on down to Yuma, AZ.  According to mapquest, the fest site is across the street from the airport and the FBO we fly into is on the north side.  Looks an easy walk.  Unfortunately many moons have passed since visiting Yuma and that FBO I used to visit has closed. Now the only general aviation parking is on the west side.  I was also concerned at the "Million Aire" name on the side as they cater to jets and have a reputation for expensive parking rates and/or extortive fuel prices for merely putting a tire on their ramp.

I couldn't have been more wrong and I'm happy to admit it. They let us park a few hours for free and even offered up a lift to the 'fest.  I bought some gas at the self serve pumps before departing and the price was right on average price here in the area.  I was wrong and I admit it.

The Yuma airport is shared with the USMC and as previously mentioned the 'fest is across the street.  They apparently do a lot of Harrier training here as the jet noise (AKA, The sound of freedom) was a frequent visitor. 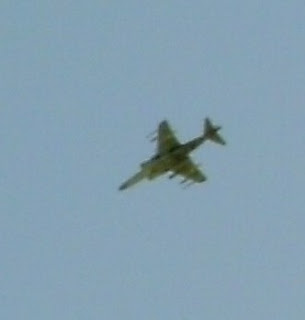 The fest had a plethora of vendors.  I picked up a nice assortment of small connectors and stuff.  I was looking for a 1:1 balun to put up an HF dipole but
came up empty.  Looking at what I brought home, I'm thinking I should have bought 2x of each!

My big score was a PS2 to USB keyboard & mouse adapter for $4.  Most of these are simple passive pin converters and depend on the MCU inside the keyboard to detect which connector is active and switch to the appropriate mode.  The keyboard I have in mind, and old Microsoft ergonomic split keyboard, pre-dates USB.  I need an active device that will enumerate itself as a keyboard and convert the PS-2 key codes.  Four bucks is a steal!  (and I'm using it tonight!)

A couple engravers were there and I probably should have picked up some name tags.  The SCSon liked this one: 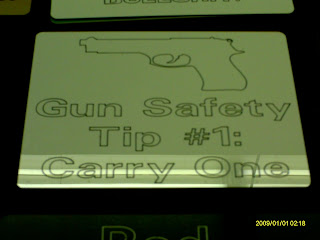 Once we figured we'd seen was there was to see, we started to head out.  I was about to call on the talk in repeater to see if anyone could give us a lift.  But I overheard a nearby conversation that included the words "Well I guess I'm done I guess I'll head out."  I introduced us and imposed for a ride.

He agreed, a little reluctantly which I thought was a little odd.  I've found NRA and amateur radio folks about the nicest and most helpful folk you could ever meet.  Turns out he was more concerned with the seating arrangements.  He drives a pickup with two bucket seats meaning one would have to ride in the bed.  We had a nice conversation back to the airport.

It was a beautiful day and well spent a little out of the ordinary.  These are the kind of days I hate to be locked in a cubicle so I was happy to be out with the SCSon.  These are also the days he will remember forever!  It also frees up Saturday for some of the other things that looked interesting.  The hometown is hosting a tech-fest Saturday or something as part of the Arizona Centennial.  Also the SCQueen reports the ABC group (Arizona Bloggers Conservative) and getting together Saturday as well.

Some times you just need to play Hookey.  Or as we call it, take a Mental Health day.

(Photos by the SandCastle Son, Copyright 2012.)

Arizona's primary is still two weeks off but my ballot went into the mail today.

Of the four still on the stage, Well you're known by the company you keep and Ron Paul supporters look (and act) an awful lot like the self proclaimed 99%.  Not to mention his foreign policy ideas are show stoppers. No Sale.

Keeping with the "known by the company you keep" theme, Mitt accepted an endorsement from John McCain ("The guy that couldn't beat Obama endorses the guy that couldn't beat McCain" - heard on Rush).   McCain's "My Friend" endorsement of Mitt is a strong negative for me.  November Fox Whiskey.  I don't understand why Mitt shared the stage with him.  Um no thank you...

I voted for Newt.  I remember how positive I felt on that election day in 1994.  I liked him when he was Speaker of the House.

Rick Santorum I just don't think can stand the test of time.  I could be wrong, but I "know"  Newt.  I remember the Contract with America.  I recall a welfare reform bill signed by Clinton that actually got people off welfare and back to work.  And thought he got shafted from there.

Yea I know he has strong negatives.  So does Barry this time around.  Gas is 83% higher today than inauguration day.  Taxes are going up due to the health care law the majority didn't and still doesn't want.  The list goes on. And on but why bother.

And you know Newt will mop the floor with Barry on the debate stage, teleprompter or not.

Oh, And National Review, you sealed the deal.  Thanks for the endorsement.

Today is a lot of things...

Valentines Day (hope you bought your honey a card!)  The SandCastle Queen commanded "only a card" this year as she has already procured an epic "family valentine gift".
Starbucks Buycott
Arizona's Birthday.

Not just any birthday, our Centennial.  Today she turns 100.
Arizona was the last continental territory US to become a state.  Only Alaska and Hawaii followed into the union.  (so far, but we have a long ways to go to get to 57 states).

Arizona is an interesting state.   Most people here are from somewhere else.  We have a lot of "snowbirds" here.  A while back RNS linked a slide show extolling the virtues of Wa State. Hey great, but we sure see an awful lot of Washington state plates round these parts this time of year.  Why is that?  And why are they trying to turn left from the high speed lane instead of the provided left turn lane?

The SandCastle Queen is a rarity:  A native, born and raised here.  She has personally seen more than half the life of the state.

I'm not a native but I'm an Arizonan by choice!  I was born and raised elsewhere, but purposefully chose to live here.   I used to visit the parental units in the Peoples Republic of Kalifornia the week between Christmas and New Years.  The papers were always full of "new laws enacted this year and taking effect on 1/1/xxxx"  After about three days of this I'd just get mad and yearn for my free state of Arizona.  Crossing the Colorado river I'd always let out a yell to celebrate my return to freedom.  Alpha Mike Foxtrot Kalifornia.

Arizona is not a perfect state.  Far from it, We have a big illegal immigrant problem and a budget problem as big as any other state (proportionally), but it's one of the best from the personal freedom standpoint. Arizona has constitutional carry.

I haven't blogged much lately.  Lots to do and by the time I get around to the blog, it's old news.

1. Copy and paste the award on our blog.
2. Link back to the blogger who gave us the award.
3. Pick our five favorite blogs with less than 200 followers, and leave a comment on their blog to let them know they have received the award.
4. Hope that the five blogs chosen will keep spreading the love and pass it on to five more blogs.

Update:  Wilson-Blog tags-up.  Roger that, I'm honored!  I've been kinda quiet lately.. glad y'all are still out there monitoring.