I am not an IT guy and I don't play one on TV.  I didn't even stay at a [famous name] motel last night.   The internet should be an appliance like cable TV.  It should just work and I shouldn't have to worry about it.   But for the sake of peace in the home, I have to be.

The SandCastle is back online with the back (old) DSL router.  The very one that quit a few months ago and was then replaced.  Now the new one won't connect to the internet.

Seems to me the problem has to be with the modem.  The DSL service has to be OK if one modem works and the other doesn't.  Same goes for getting into the model (192.168.0.1).  Works on one (sometimes), but not the other.

We already traded in the "new" modem once, so I'm at a loss.  Is the current model just a turkey?  Time to try another make?

Someone suggested could be a power supply getting flakey.  Good suggestion but I don't think so.  I'm tried each power supply with each modem and the problem follows the modem.  I think we'll try a different manufacturer next time.

Got any suggestions?  I'm open!

"The hard part was opening the package"

What is your reaction when some one tells you "You have a tail light out."?  My standard response is "Thank you for letting me know.  We'll get it fixed pronto!"  This was exactly the scenario earlier in the week.

Last night I researched the replacement part number and repair procedure.  Looks like it's a no-tools needed replacement, though the pictures in the Haynes manual weren't very clear (to me)*.

The SCQueen picked up a couple new bulbs while out and about today.  The SCSon agreed to take a crack at putting them in.  Rather than telling him how to do it, I pointed him to the repair manual.  He found the relevant section and enthusiastically replied  "A picture book.  Cool! I can do this!

I inquired about the repair upon returning home.  He replied with "I didn't know which side you wanted replaced so I did both.**" and then the title quote.

One day he will realize the reason I asked him to replace the bulbs stretches far beyond "free maintenance" for me.  The more important lesson is "the engineers have made some of these jobs real easy!  you CAN do this yourself."

A college roommate apparently had no clue ordinary people could make simple mechanical repairs.  I came home from school one day grousing about a flat bicycle tire.  As I pulled out the tools & patch kit he looked at me bewildered and asked "what are you doing?"  "There is a hole in the tube... I need to patch it."  "And you can do that YOURSELF?" he asked incredulously.''

It dawned on me roomie and I grew up in vastly different worlds.  His dad was a furniture salesman and paid others to do what he didn't understand.    His dad understood deal making.  My dad was a hands on fix-it-yourself-engineer and how stuff works.  He grew up on a farm and there was no one else.  I learned at his knee and been patching tires since learning to ride.

I hope to pass along the latter lesson to the SCSon.  You CAN do this!

* This is not a knock on the images in Haynes or any repair manuals.  I've taken extensive "before" pictures prior to extensive invasive automotive surgery and found my own pics significantly less than 100% useful in the "after" reassembly phase.  Or maybe it's just me and he interprets the pics significantly better.  If so, good on him!

** My bad for not being clear.  He'd helped me verify the problem so I thought he knew.  But "replace both" was my actual intent.  We're replacing a possibly 24 YO light bulb.  Just how long do you expect the other one to last?   The expensive part of this job is the labor.  We're already in there, just replace the pair.

Completely skunked on the raffles this year.    The last raffle item (a gold ticket) was a ~$1500 pistol course with Rob Leatham.  My ticket is 15642.  The ticket pulled was 15641. Dang that hurts!  The night has been a story of near misses but this is the closest,   Ouch!

We picked up a silent auction La Pierre quote: 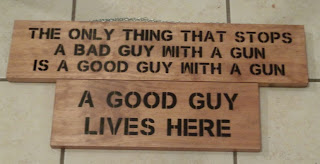 I bid on a couple other items including a .22 revolver but someone else bought it outright.  (I'm kicking myself because I should have done it first!.)  Yet again, "ya snooze, ya lose!"

I purchased an AR-15 in the live auction (The SCSon & SCqueen had already departed for an evening of paintball)..  Upon retuning home the SCQueen asked "How much did you pay?"  Me:"prolly too much!"

Here's the next chapter

Update:  The committee called to tell us we didn't pickup our entire purchase.  The sign included a brick of .22 ammo!  That alone is probably worth the price paid (And they'd have likely gotten alot more for the package if it were made clear).

DO NOT BE ALARMED!!!

If you see a teenager carrying/manipulating a rifle.  DO NOT CALL POLICE!!!

The SCSon is on location in Daytona Beach FLA for the National Drill Meet.  He reports there are posted notices warning of teens carrying guns and it's OK.    DO NOT BE ALARMED!!!

Here is the actual posted notice at the SCSon's hotel: 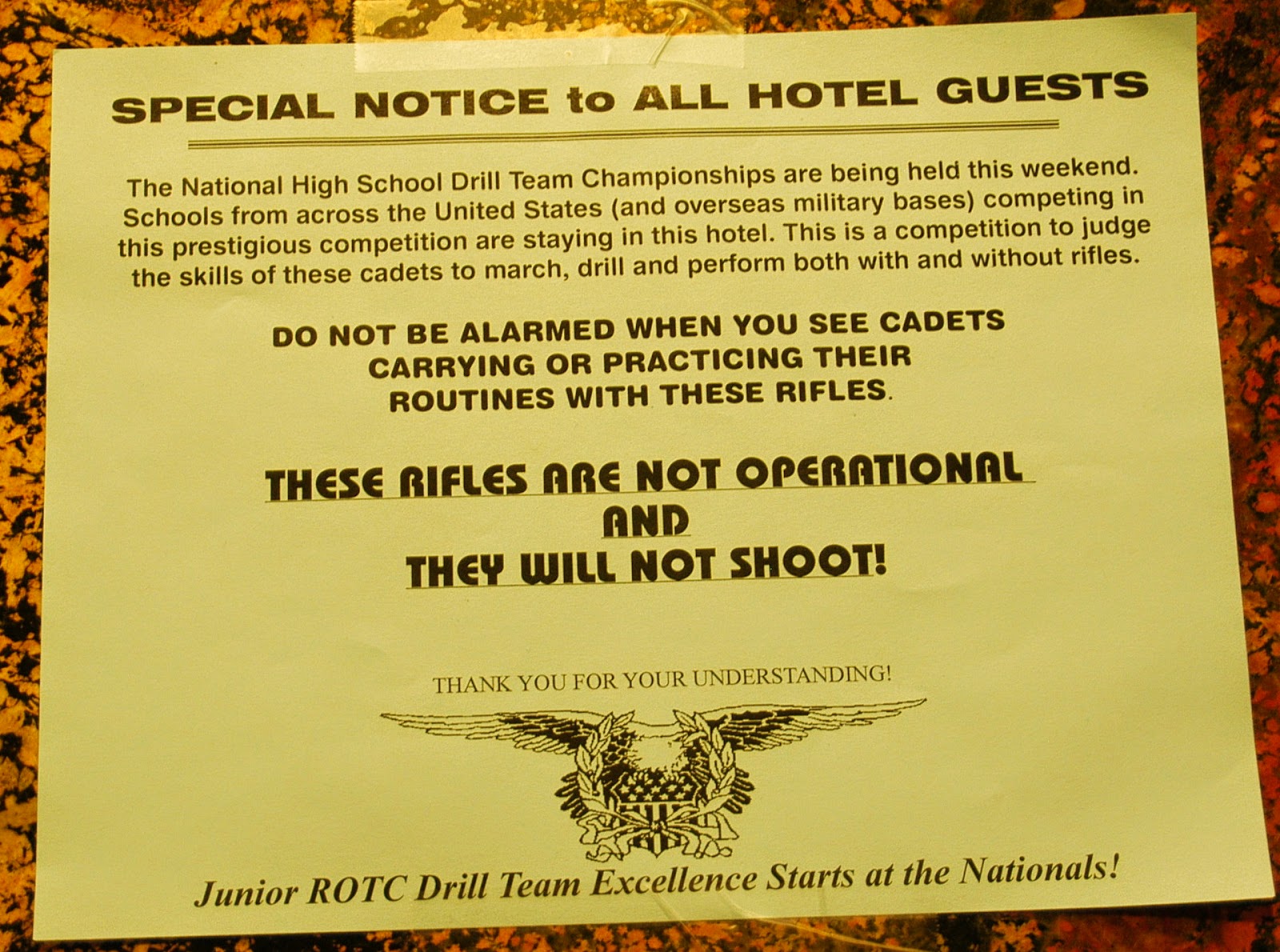 Very tactful I must add...  Now if only the power outlets in the SCSon's room might provide some power,,  The SCQueen reports "it's an old hotel"...  My response "110VAC is as basic a need as water"

(If I might quibble,  It's not that these rifles will not shoot, rather these rifles CANNOT shoot.  There is a difference between "will not" and "can not".  As a  weapon, these rifles are most effective as a "club".)