While it is not my place to set/change rules for the SCSon's ePostal match...  I will let fly a bit of insider information..  He's is presently off the grid at JROTC camp through Friday.  And we're busy with the move... also we have not yet seen a June match posted yet,  therefore entries to the May match will* be accepted through the next weekend.

We both took a number of tries at the target.   While there was a near miss on  a bomber on one target, there is a clear white line so it's a miss.  Still I missed "my base" on all three so I am declaring a 0 point victory!"  and all three will be scored entries.

He did  better connecting with a couple targets.  I blame my aging eyes :-(

* The SCSon is the matchmaster so I am loathe to speak for him, but this seems a no-brainer call.  But his word is law... when he returns.  Will he be able to reject a score dated June x when he hasn't declared a deadline?  I personally would find it difficult.. If you have scores that can beat my 3x nil, suggest get them in before he can say otherwise ;-) 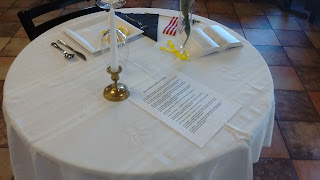 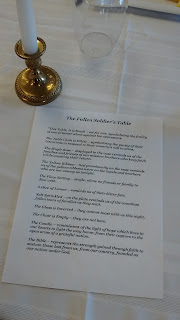 I caught word that Chick-fil-A had a tribute to fallen soldiers somewhere in my AM webwander.  The SCSon and I dropped in to see it.  And here it is...    Click on the images to embiggen.

On arrival I was happy to see a Mother clutching her ~7/8YO daughter, explaining the meaning to her.

We ordered lunch and I took a seat where I could observe the display and those that stopped by to check it out. Most spent enough time to understand it (in chrono order):  Young African-American family, 70-ish YO (WW-II vet?  I wonder), mid 50's guy with a bicycle helmet, etc.

Sage words of advice from a friend who is currently sitting in ICU hoping that the surgery to re-attach his thumb takes (the first one didn't).

He was using a power miter saw to slice off a piece of aluminum.  The saw snagged the work piece and twisted it sending his thumb through the blade before he knew what happened.

Thank $DIETY for modern medicine that makes even attempting to reattach a severed digit.  Seems not very long ago Dr's wouldn't have even tried.

The main two projects we need to complete before making the big move is to renovate the kitchen and replace the single pane windows with dual pane windows.

Step 1 in the kitchen:  Remove the existing cabinets.  The SCQueen found a contractor that would remove them and take them away (presumably for resale).  Total cost to us: $0. 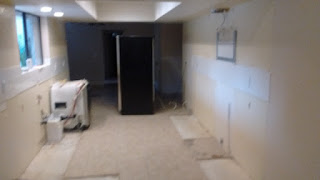 The cutouts in the tile kinda show where the cabinets were.  Kitchen sink below the window on the left, stove on the right and refrigerator far back right.

Next the contractor will rip off the drywall to deal with some mold (surprise!)  But now is the time to deal with it.  Also they'll raise the drop ceiling about a foot.  How much?  Don't know... contractor still hasn't responded with a quote.  And that worries me.  It's just bad business.

Then we can bring in new cabinets and top with granite counters.  Finally we'll finish off with a new dual (and deeper sink) and new garbage grinder.

Tonight we finished job #1 - changing all the locks.  First we changed out all the deadbolts because the existing ones were 35 years old and looked everyday of it.  One door also had to be replaced* (insecure window and a doggie door big enough for 2x sized me to squeeze through) as well, including the hinges and relocating the striker plate in the door jamb.

The new door is also better insulated with double pane windows and a fiberglass core.  I care about that because this is a South facing door will see a lot of direct sun exposure.  And I pay the power bill!
Posted by danno at 20:59 1 comment:

I thought I'd covered this in the previous post.. but looking back I see a continuity error:
So  here's the deal..  the shredder died.  After several hours of hard use, it was INOP.  I'm hoping for a thermal fuse...

I took the shredder apart... fully expecting a blown fuse.  But then my finger brushed a large cap and it moved as if it weren't connected.

To quote a line (switch to  New Jersey accent)  "*well there's you're problem!*"

Somehow the cap had broken one leg off the circuit board!   I repaired it with a section of multi core, probably 12-14 gauge, wire soldered to fix the now broken trace.

So it's back in battery and ready for battle.  So far so good.  I shredded a veritable mountain today and it's still running.  I think it's good.
Posted by danno at 21:52 No comments:

Sand Castle Base is moving!

It's official.  The SandCastle Crew is relocating the Base.  The SandCastle Queen and I spent 45 minutes signing a stack of papers at least an inch tall.  At least one document was our certification that we signed another document.  The title has been officially recorded and it's ours.

Now the real work begins - sorting through almost 20 years of accumulated stuff and moving every thing over.

Wow... from the first "hey lets see what's out there?" less than 4 months ago, we closed today on a new SandCastle Base.

The SandCastle Crew enjoyed our first dinner tonight at the new house.  There isn't much furniture at the new place but the Realtor bought the formal dining table from the seller for us as a "thank you" gift*.  We changed out the deadbolts and called it a day.  The SCQueen was down for the count shortly after returning to the existing base.

I took the day off and spent it reviewing the accumulation of documents on my desk.  So far I've emptied the "toss can" 4x, the shredder 8x and loaded up one box of "keep".  Oh and I may have burned out the shredder.  It presently doesn't work.  I'm hoping it's a thermal fuse and will be OK in the AM.

It amuses me...  rather than keeping after the paper piles here.. we're moving... which will force us to separate the wheat from the chaff.   The garage will be even worse :-(  Our household systems clearly need some work:-(

On the upside, the SCQueen's dad has been in a convalescent home for > 1 mo and at one point had seemed to have lost the will to live.  Now he can't wait to see the new place.  His daughter's have come up with a plan for a visit Saturday AM and then take him to lunch.

It will be a slow move.  We are not under the contractual "gun" to move under a specific timeline.  We have several property upgrades to finish before actually moving in:  double pane windows, security cameras, additional insulation, etc...

* The SCQueen asked for it to be included in the sale.  The seller wouldn't include it, but our Realtor was amenable to purchase it for us.  If anyone needs an honorable rep in the Phoenix metro area, just ask and I'd happily to recommend him.  He's the best.  (FTC disclaimer: I 've seen good and I've seen bad...  Said Realtor did not solicit this recommendation nor offer any compensation in any way.  He's just that good.)