... to go to my friend's funeral!  Yes, I'm old enough to qualify for (some) senior discounts, but my friends should not be dying at these ages.  He was 61.

He was an engineer and pilot.  We met in the flying club at the then $DayJob.   He was a VFR only pilot.  Never aspired to any higher ratings, but that never stopped him from taking extensive cross country flights.  Including Oshkosh twice (1800+ miles one way).  Heh, I recall after the 2nd one he said "We never got higher than 500 feet AGL (Above Ground Level) all the way home."  "Do you know how many 2000' towers there are out there?" I asked?  My flying philosophy is "altitude is life!"  Should the engine hiccup, altitude gives me time to diagnose the problem and/or find a suitable landing site.  Not to mention, we are above 2000' TV towers.

I learned a friend was selling his 1946 Aeronca Chief, $12k.  It's not a "practical" airplane, top speed was only about 85kts and no electric starter.  It was a tailwheel toy!  I called a bunch of friends to lay out a plan:  If we can get 6 people together and agree to some ground rules, we can buy it for only a couple grand each!  (I did not have $2k laying around, but I did have some "6 months no interest" checks on my credit card) - yes, I bought a (share of) an airplane on a credit card! It wasn't practical, but is was *magic* to fly!

He bought in and in time flew it to Oregon, some 15 hours of flight time one way.  He also got into "cruiser" motorcycles and took many long range rides.

He also went on to become an Executive Vice President at a DJIA company, though you'd never suspect it meeting him off the job.  Hell, I knew and he would barely acknowledge that part of his life to me.

During my ~30 years of knowing him, the only thing he failed at was "retirement".  He tried 3-4 times, but always ended up bored and found another job.

I am missing him already.

At least that's how it's supposed to be.  Today the SCQueen decided she needed a few items to complete Christmas dinner preps..  Half an hour later the phone rings.

It's the SCQueen: "The electronic payment systems are down.  So are the ATMs .  (question unasked: "can you bring me cash?)"

"How much are we talking about?"  "Under twenty bucks."  "Be right there!"

I'm not a fan of using "e-pay" for minor purchases.   It's just too much trouble to reconcile the bill at the end of the month IMHO.

Sidebar: Once The SCSon and I visited a local corner store to buy sodas.  Showing up at the cashier I realized I had no cash to pay the bill (less than $2).  And the cashier advised e-payment was not available.  I told him I'd be back with cash.  He was genuinely surprised when I was back within the hour to pay up!  In this case, good on the proprietor to not sweat a $2 purchase over a $.05 cost.

I've used credit in emergency situations but in general, I really want to pay for small stuff in cash.  I also don't carry lots of cash, just "lunch money"

Fortunately the SCQueen met me in the driveway and I didn't actually have to park in the Godforsaken parking lot design. As I passed off the Jackson, she said "It's getting ugly in there!"

Merry Christmas, Y'all!
Posted by danno at 22:28 No comments: 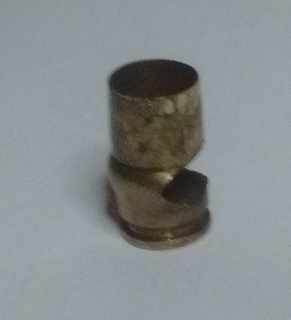 What are the odds...

Who thinks "respond with a gun" is a reasonable response to "too much noise in the upstairs apartment?

I had a couple downstairs apartments during my college years.  Frequently the upstairs noise was enough to "disrupt" us downstairs.  Most times we accepted it as "price of living downstairs".  Though I will admit to serenading an apparently amorous couple with a bad rendition* of "Black Dog" after being woke up at "way-too-dark-thirty" for their quickie.

But firearms never entered even in to the thought of the equation.

Deeper research suggests the shooter was hit by a ricochet, but it doesn't stop the "serves you right" "payback's a bitch" angle to the story.

* I have an electric guitar, but I try not to inflict my playing upon others.  There have been special exceptions.

Guns are never a solution to noise complaints!

Now if you've noticed the "about me", I'm not a big fan of "ball sports".  So the smartA in me selected this T: 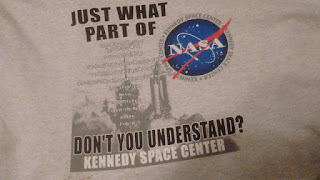 I really like the equations explaining "This *is* Rocket Science!"

And the back of the shirt explains the equations on the front: 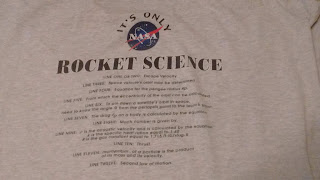 The other shirt I really like is one the SCSon picked up.  It's the old NASA logo with the tag line "Not Flat, we checked".  Nicely done guys!