The SCSon and I hit the range today.  After all, temps were only in the low 100's.

First we had the Trap field to ourselves for a couple rounds of Trap.  The rounds went quick.  I shot my semi-auto 12 ga while the SCSon wanted to shoot a 20" barrel12 ga over/under.  He probably hit 18-20.

2nd round he went to the new over-under that most of his team mates are shooting.   He went 18 straight before missing birds #19 and #23 for a 23 score.  I shot about the same, possibly a little better.  Maybe even all 25!  This was a good round for the SCSon and my best round ever!  Sure wish I had taken the camera.   As we say, video or it didn't happen.  Missing same, call it a fish story.

Then we headed up to the main range to shoot some ePostals.  In addition to the normal .22s, the SCSon wanted to try a .40 cal in his exploration of recoil therapy.   One reason it doesn't get out much because it throws the brass into the next zipcode. 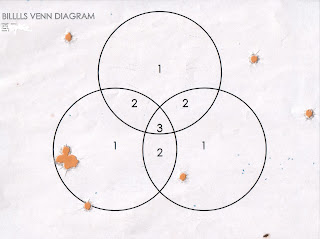 As much as I was happy with my grouping, it only counts for 1 point.  still 4-5 overlapping shots.  Need to get the flyers dialed in then we can adjust the sights.

Addendum... I grew up racing sailboats with my dad on the San Francisco bay.  Apeus-foredeckus (fore-deck ape) was my title starting at age 12.  Capturing the outboard sheet then pushing out the spinnaker pole and snapping it into the mast fitting on a jibe was a rite of passage.  The bay is a long way from the Sonoran desert.  Still Shotguns a'la a perfect 25 Trap score may be the SCSon's rite....

I hope I am there to help shoot the hat!

The 2nd round of Sporting Clays was Thursday.  It was hot & humid which I think affected everyone's scores.  There is little or no shade out on the course.  Also starting on stage 12 meant walking an extra 90 degrees of the circle before starting and an extra 90 after finishing.  Did I mention it was hot?

BTW, here is my Favorite shot of the day: 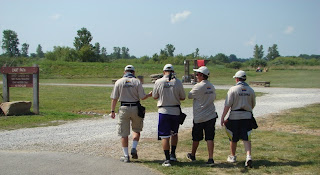 This is the team headed out to start the 2nd round.  Walking as a team joking about what ever early teens joke about,..  as a team.

While we all saw them as a team, in reality they the three with blue pants above were a squad and the SCSon competed individually.   We learned late in the afternoon the squad scored 4th in class.  Wahoo!  Great job guys.

The Trap even started today.

They started off rough but had a strong finish.  The winds were gusting and the clays were flying differently than they are used to.  But the SCSon scored a 24 on the last of today's rounds.

Four more rounds tomorrow then home to sleep in our own beds tomorrow night!

Meet the Rio Salado Target Terminators squad:
We started at Stage 1 on the North course.  This was a bonus as it minimized the extra walking to the 1st stage and home from the last.  Pitty the teams starting on stages 7 & 8 as they effectively had to travel an eatra lap of the 1 mile loop.  Thursday we start on 12S.  -3 is almost as good as 1,

True Blue Sam came out to cheer on the team and share his local knowledge and stash of "what works to keep the pests away".  File this under "questions we didn''t even know to ask."  He recommended a DEET repellant to keep the chiggers away from the ankles and lower legs and Buggins Spray on the head and neck for the deer flies and othrtd.  The peppermint oil also has a cooling quality, very refreshing to apply.  The proof is in the results - no bites!  Thanks TBS!

The the SCSon notes, The Potterfields of Midway USA took time to meet & greet the teams.

I've been a satisfied customer for years.  It was nice to meet the man who sets the corporate tone and gives back to the sport.

We took a walk down the vendor area.  First top was the ammo barn. I had to tell the guys behind the desk "Ok, I am officially impressed". 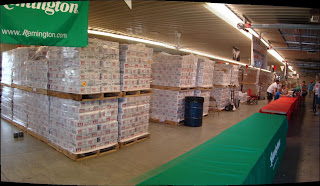 It is difficult to adequately convey the size of the facility and quantity stored here.  The SCSon posted the first shot of a two shot panorama.  The people at the right of the screen are approximately half way to the far end of the building, pallets stacked two high as far as the eye can see.

The scenery color is a nice change of pace.  Arizona is mostly shades of brown.  Southern IL is a refreshing green:

These guys have it!

The SCSon's SCTP team (Rio Salado Target Terminators) are participating in the SCTP nationals this week in Sparta IL.

A couple parents (two fathers with their sons) are making the 20 hour drive.  Unfortunately the engine gave up the ghost before they'd cleared the state.  They were towed to the dealership in Gallup NM.  Mechanics there report the engine threw a rod.  It's toast.

They were unable to rent a suitable car to continue with the trailer or even just load up the essentials and continue on.

The vehicle owner bought another car sight unseen and is having it driven up to them.  They expect to be back on the road around midnight.  Plan A is to alternate drivers and only stop for fuel and bathroom breaks.  They still have 18 hours to go which puts them on site around 8pm Tuesday.  First round of sporting clays is 10:30 AM the next morning.

Now this affects the entire team as they are carrying the team's shotguns & ammo (enough for a pretty good stand at surviving a class 2 zombie horde!)  The shotshells are easily replaced at that end of the trip.  But the guns not so much.  If something else breaks, the team will have nothing to shoot.

The SCSon and I fly out waaay too early for my likes but it gets us East of St Louis early enough to clear the city before rush hour traffic takes hold.

Plan B is for the SCSon and I take the risk of taking the guns with us on the airline.  My initial perusal of the airline website suggested the oversized case would cost $175 each way.  The SCQueen called the airline and clarified just $25.  With the risks of bringing it through TSA and getting "misplaced" enroute, I'd rather not take this option.

I reached out to IL resident TrueBlueSam looking for other options.  Unfortunately his only scattergun is an inherited short barreled coach gun.  This would be one step above throwing rocks.

One idea we discussed would be to buy an 870 at my local Bass Pro or Cabelas  (complete the 4473 & transfer funds) and take delivery in St. Louis.  I ran this by my phrendly purveyor of phine phirearms.   He tells me as far as he knows, long guns can only be sold in state or to residents of adjacent states

He suggested shipping it to myself.  That's a good idea and one that can wait until late tomorrow to pull the trigger (pun unavoidable).

If anyone is going to be on site in Sparta, drop by and say hello.  Come on out an meet the team.  Email me at sandcastlescrolls-at-msn-dot-com and I can let you know where we'll be.

Also, while plan A and plan B get us to 99% confidence, if anyone is going to be on site with a gun to lend, please contact me at same email.  For Sporting Clays, we only need one gun... the boys can share.  The team will contribute labor for cleaning duties! (under your direct supervision and with as many "you missed a spot's" as necessary and/or entertainment value dictates :-)

Update 16July2013 2100.  The guys driving are on the western edge of St. Louis.  They are still in the wrong state but close enough we could go pick them up if something happens now.  They will hit their campsite around 2300 and I bet they will be some very tired guys.  We've heard rumors of inclement weather accross Texas,Oklahoma and Missouri and a couple new tires somewhere along the way.  Will update again after we hear the stories tomorrow.

BTW, I reached out to a couple Bloggers in case they get swallowed up in a black hole.  Neither had anything appropriate but were willing to go way out of their way to help.  TBS was willing to make a couple drives out of his way to buy a gun for the team to use and keep us from running afoul of the local laws.  DOOT didn't have anything either but reached to a friend who said "If you know him and say he's a good guy, we'll make it happen."

I finally have sufficient equipment to fence at the club on a regular basis.

A normal Monday night class will have some 20-40 participants but tonight we were only 6:  Two youth ringers, probably nationally ranked.  The SCSon (very low experience) and a young lady with a lot more experience.  Your humble host (over 50YO and at least 50# overweight) and a young man under 10YO.

Before we get to the action, I need to explain how team scoring works.  Each bout is to 5 touches.  But if your team is behind, your fencer has to make up the deficit plus make the five touches to end the bout.  In other words, the first match ends at 5.  Say the losing team scored three.  That means the next fencer on the losing side has to score 7 (2+5) to end the bout.  The leading team only has to score 5 to end it.

My team B jumped out to an early lead.  I scored good points against their ringer probably because I'm so inexperienced.  My moves were so in-elegant and out of his expectations, they worked.   IOW, a couple touches were ugly but hey, a touch is a touch.  But I also scored reposting off a couple major league parry 2s.

My bout with the SCSon was good from a proud papa standpoint.  I saw a lot more aggression and follow through.  He's younger and faster and should be able to whup my butt any day of the week.  And that day is coming closer with every practice.

The final bout featured Team A ringer vs Team B sub 10YO.  "David vs Goliath" might be an apt description.   Said ringer has a ton of experience plus at least a foot of reach on said sub-10YO.  Sub 10YO didn't stand much of a chance but he entered the match with a 10 point team lead.  That meant he only had to score 5 touches while said ringer had to score 15 to win the match.


Team B's sub 10YO held his own in the face of superior skill and experience.  He never gave up and even tried some interesting sumo inspired footwork to distract his opponent.


They battled back and forth with each scoring points.  Eventually the score was tied at 44:44.  Next touch wins and it really could go either way.

In the end Team A's ringer scored the match point.  What a match!  Team B's sub 10 YO never backed down.  I am proud to call him "Team Mate"!

Dang I was happy to participate and compete with these young and upcoming fencers.  We all shook hands and I hope to see my competitors at the Olympics in the coming years.  Good luck and good fencing to those heading off to Nationals in the next few days.