Set the scene... the SCSon is now 18 and is a HS graduate.  Now he's on a crash course learning to fly before starting up at ASU (Mega-apologies for the unavoidable pun).  The heavy flight schedule requires his presence at the airport at OMG-O'clock.

He's been using my "alternate" car, a 1991 Miata with enough mile to drive to the moon.  It also means some OEM systems are now INOP.   Like HVAC.  Personally I blame him.  I think his size 13's kicked the connector at the blower in the pax footwell.  But even in the blast furnace that Phoenix is this time of year, it beats the alternative.

But you know what is intolerable?  No Radio!

He returned home a few days saying the radio won't even power up.  So we started some basic debugging...  found the radio I bought 18 months ago when I thought something had died in this radio.  No change.  So that's not the problem.

The manual tells of an interior fuse box outboard of the driver's left thigh.  I relate same to the SCSon (It's far easier for him to self-contort to view these out of the way places than Official Senior Citizen me).  He looked and announced "Nope, not there - just a bunch of connectors".   I asked for a flashlight and assumed the position.  Imagine standing on your head chugging a beer while rubbing your belly.  And located the fuse box.

His quick survey of the box identified a blown fuse. 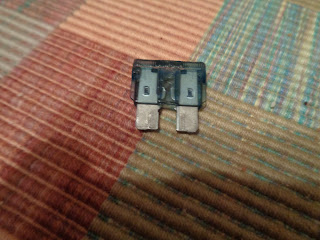 Upon replacement with the 18 month old "new" radio, it worked -- for about one second before **BLAM** and silence.  While the radio is ~18 months old, this is the first time power has been applied.  So I we have a new answer to the question asked 18 months ago "But do you know what you do not get in a $15 car stereo?"  The answer then was "AM radio".  Tonight we can add "quality capacitors!".  That flowery looking component is a blown up electrolytic cap.  The SCSon tells me it was really loud when it blew! 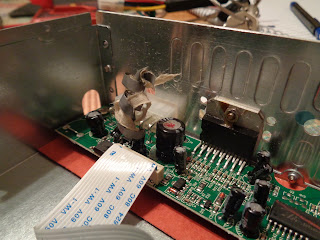 We'd have to dig deep into the circuit to figure out if this is a boost circuit to power a VFD display or a buck to drop car voltage down to 3-5V for the receiver/power amp.  OTOH, I can replace the entire unit for $10 in the current frys ad.  so any further analysis would be purely academic.

In the meantime, we re-verified only expected 11.5-14v present at the powerlines and re-installing the previous radio works as expected.  Clearly the power supply problem is a radio problem, not an installation problem.