Shooting at the SandCastle! 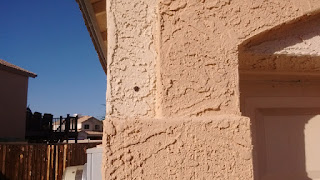 The SCQueen noticed the hole as we pulled a breaker to work on a light circuit in the house: "Hey that wasn't there last week when I mowed the lawn!" The hole is about the size of a dime.  I'm thinking possibly .38/9mm/.40/.45 sized.  The lack of penetration suggest a low terminal velocity impact and/or low impact angle.  Probably some idiot celebrating the Autumnal Equinox by shooting a gun into the air without concern for where those bullets come down.

We haven't found the projectile, nor any fragments so maybe it's much less innocuous.  The SCQueen ended up calling LocalPD on the non-emergency number and they sent an officer to take a report. We don't expect they will investigate any further but rather the report will go into the database and if the scenario starts to trend, maybe they can take action then.  Our expectations are very low...

Shooting into the air is a rule 3 violation!

Arizona has "Shannon's law" which makes such celebratory gun fire a class 6 felony.  So named for Shannon Smith who was standing in her back yard, talking with a friend on the phone when a stray bullet hit her in the head, killing her.  I am 100% on board with this law...  People being stupid with guns should not have access to guns.

MythBusters looked into "shooting a gun into the air" and concluded "inconclusive"... They tested bullets fired near vertical so they have to reverse trajectory and fall at terminal velocity.  They did not test the case where a bullet was fired at a lower angle and fly an arc trajectory.  (And how could they test that?)  I suspect that's the scenario that probably killed Shannon Smith.

Interesting, there is an exception in the law for shooting blanks.  Fair enough.  Don't shoot into the air!  Even with blanks.    Don't be stupid..