Meet my Mother In Law 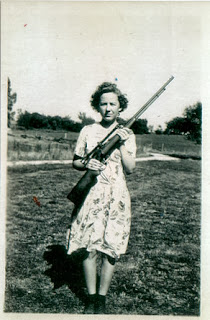 Update:   23Oct2013  TrueBlueSam identifies the rifle as a Remington 512.  Remington made the rifles starting in 1940 so the timeline works out.  Thanks TBS!

The SandCastle Queen came home with some photos last week including this undated photo of her mother.  I love it... At port arms with her finger clear of the trigger.

"SCMIL with her brother's gun" was written on the back.  SCMIL thinks she was 15 or 16 at the time and it was taken on the family farm in Indiana.  Doing the math, that would date the picture circa early 1940s, probably during WWII.  She thinks the gun belonged to her brother G.

SCMIL had four older brothers, three of which enlisted in the USArmy for WWII.  Timing of the photo suggests her brothers had been through basic training by then and passed rifle discipline on to their little sister.

One went ashore on DDay+1 and went on to liberate one of the concentration camps; SCQueen thinks it was DachauBuchenwald. SCQueen reports he never talked about his time in the war.

A 2nd brother was stationed in South America, and the third lied about his age to enlist.

I don't recognise the gun.  Bolt action with a tubular magazine - doesn't ring any bells*.  And one heck of a scope!  I hope it now resides in a safe with the G descendants.  Unfortunately the family tree includes a couple black sheep ne'er do wells that could have easily pawned it for peanuts. And that makes me sad.  I have a strong belief that guns should be treated as family heirlooms at least as valuable as the family silver.

The SandCastle Queen comes from good stock.  I chose wisely.  She also approved the content of this post.

* We welcome any information on the rifle and/or scope in the comments.

Matthew Bracken's "Domestic Enemies: The Reconquista" is available as a free Kindle download (follow the link!).  I don't have a Kindle but I do have the free Kindle app on my Nexus 7 & PC.

I picked up "Enemies Foreign and Domestic", the first book in the trilogy "Enemies Foreign and Domestic".  I couldn't put it down.  It was an exciting read though not exactly a happy ending.
I've downloaded my copy and started on the next volume.  You have just a couple days to download yours as well.  The last in the series will be available starting Oct 28th.  Mark your calendar!

Item 2:  For those in the Phoenix Metro area on November 5th, Michael Bane will be shooting a 2014 episode of "Downrange TV" at the Ben Avery shooting range just North of the metro area.  Ben Avery is truly a world class range offering everything from small bore pistol to 1000 yard rifle.  Also every shotgun game as well.  Click Here for the invite and to sign up.  H/T ExUrbanKev.

The Tuesday scheduling will likely conflict with my DayJob(tm) requirements So my participation is doubtful.  I envy those that can make it.  Should be fun!

The scene:  The SCSon and I are at his electronics group meeting.  He has set up his Raspberry Pi and typing random linux commands into the terminal.

One of the "commands" he entered was "bacon".  As expected (at least to me) it responded "unrecognised command"

So I ask "What should a "bacon" command do?"

"Why it should Make Bacon" he says as if it should be obvious.  "And then print out this squigley character"  [long explaination of how it's called  a "tilde" along with the mathematic meaning while another member explains the VHDL meaning omitted].
No matter, to him it's a squigley line that looks like cooked bacon.  Fair enough.

Ok... so let's write a command that makes bacon.  And we proceed to do so.

Here is the code we came up with:


#include stdio.h  (need to figure out how to make the angle brackets appear through the html)
main()
{

And in the process, we got into a little programming.  He also learned that the "and" character is called an "Ampersand".  I put off the "take the address of" talk for another day.  Same same for the "seg fault" error we got missing the operator.

He also got some exposure to the C compiler and the linux rename command ("mv").

He had fun exploring how much bacon it would produce.  One million strips worked, but a billion crashed the terminal window.  That led into a discussion about numeric representation. Discussions on the trip home got into binary representations of a character, the ASCII code and UNICODE.


Somehow a side discussion erupted on the subject of "conservation of angular momentum" (the physics behind an ice skater spinning "slowly" and accelerates as she pulls in her limbs).

These are things not taught in school these days.  So I'm glad for this group that piques his interest into asking questions.

I wouldn't trade my Tuesday nights for the world!
Posted by danno at 23:38 No comments: