I started to do an update to "A very short play in three scenes" but it quickly became a little too long for the update.

First, let me give props to Buds gun shop.  I sent emails to both Buds who sold me the gun and Hi-point who manufactured it.  It wasn't clear who assembled the package deal and hence who is responsible for the fix.  Derek at Buds emailed on Dec 26 (Sunday after Christmas) and explained they buy the package deal from Hi-Point but offered to assist in resolving the problem with Hi-Point.

Hi point never responded but they did answer their phone today.  The phone was answered by a realperson(tm) not a voice-jail system.  I explained the problem and she answered "I know there's an easy solution to that problem but I don't know what it is.  Standby while I connect you to someone that can explain it."

Next human voice on the phone says simply "Turn it over".  And patiently waited over my objections how it can't be done.  Eventually I unscrewed the mounting screws and the solution became obvious.  The rails are C channels but with different lengths on the legs.  One side fits 3/8" rails and the other side fits 5/8" Weaver rails.  Nice!

He said there is supposed to be some documentation in the box explaining this (RTFM!) but I still haven't find it.

November ePostal results are up

Manfred has posted the November ePostal results.  I congratulate the winners and my only regret is the few entrants this month even with the 2 week extension.  I count only five discrete shooters.

No matter...   I love the concept of heading to the range with a specific mission.  I'm not just randomly poking holes in paper with some nebulous "good enough" yard stick to measure by.  This is a more measurable standard to judge by.

Losing  2x2 (same two pistols, he beat me both ways) to my good blog-friend TrueBlueSam, I would love to to shoot a match side by side.  I fully expect the result to come out the same, but I also expect to learn something in the process!  TBS, you have an open invitation on my range any time!  And if I put wheels down somewhere in your vicinity, I hope you'll have time to offer a lesson.

I will also say, shooting the Crosman .177 air pistol has taught me a lot about patience and smoothness.
Posted by danno at 01:45 5 comments:

You picked a fine time to leave me Lucille

The SandCastle's DSL modem chose Christmas day to give up the ghost.  I didn't touch it, I swear!  All I did was attempt to enable the wireless networking.

Customer "service" in India said since I'm renting the modem they would send me a new one but it would be 2-3 business days.  At $5 a month, I've bought that modem about three times over so I didn't really want to rent their @$#* modem anyway so instead we just bought a new one locally today.  This one combines the DSL modem with the router so it's simplified the wiring here in the process.

This morning the SandCastle Queen brought home the new one this morning and we were back up and running in about 10 minutes.  Just need to call billing in the AM and get them to stop the modem charge.
Posted by danno at 16:53 No comments:

Scene I - The SandCastle dinner table
The SandCastle crew is enjoying a dinner prepared with love by the SandCastle Queen.  The SandCastle Son pipes up with "So dad, what's the newest gun you have?"  I sheepishly look up from my plate and muse "would that include the one that is currently in transit?"  SCQueen rolls her eyes and lets out "Oh geez... what'd you buy now?"  "Oh trust me" I answer.  "You're going to like this one!"

Scene II - Flashback to Local gun range a couple weeks ago.
It's a beautiful winter Saturday at the range, recall this is the Sonoran Desert so it's sunny and temps in the low 70's.  Setting up on bench 25 I recognize another The Capitalist Pig two benches down with a new rifle.  Blogger tells me about it and why he picked it up.  You see a local range hosts a fun steel pistol match on Thursday nights.  One night a month they also run a "pistol caliber carbine / shotgun" match the night prior to the pistol match.  His new acquisition was a Hi-Point carbine in 9mm.  This was his missing piece to shoot the match.  I watched his progress and it looked like entirely too much fun.  It also doesn't take much time to figure the cost savings shooting 9mm over .223.

A few days later I found my self on the site of Buds gun shop.  Buds offers several different packages in 9mm, .40 and .45 and with several sighting options.  The straight 9mm with iron sights is $257 (cash/shipped) and $281 including a Red Dot sight.  I decided to think about it more and moved on.  A few days later I was back at Buds and the rifle was now sale with only a $1 delta between the basic package and the Red Dot package.  I reread it several times looking for the catch.  $1 to add the Red Dot sight?  I weakened and pulled out the credit card.  (It also helps that a good friend is an FFL and already on their shippers list.  This makes the legal transfer entirely too easy!)

Scene III - Today at the range with the SandCastle Crew and the new carbine.
It shoots pretty nice though the trigger is a bit stiff and it's shooting a little high and right at 25 yards.  It's constructed of stamped steel and plastic.  I'll admit is has a "cheap" feel to it, but what do you expect for a coupla*** C notes?

It would have been nicer if the "Red Dot" package had included instructions on how to mount the Red Dot scope with a 3/8" mount onto the 3/4" Weaver rails on the gun.  Still nicer if either company (Buds who sold the package to me or HiPoint that presumably wholesaled the package to Buds would answer the emails asking for help.)    Stay tuned for yet another tale of customer service how-to or how-not-to.  So far no response from either inquiry.

* Posting new acquisitions to the armory would create an searchable inventory of the SandCastle Armory (as if the trail of 4473's doesn't already do this).  Still I don't want to make it easy hence the "don't post new acquisitions" rule.

** normally I would send some linky-love  to said blogger but he/she/they have not web-licly announced possession of said rifle and I don't want to spill the beans so to say.  (The "don't post new acquisitions" rule referenced above applies to others as well)

Update: The anonymous AZ blogger has web-licly outed themselves with said rifle via a YouTube video and granted linky love permission.   I ask you, does this look like fun or what!  I need to acquire a couple more magazines but I'm there next month!
Posted by danno at 23:30 5 comments: 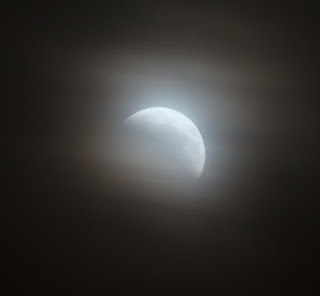 I hope your viewing weather is better than ours. We have a very powerful cold front approaching giving us high thin clouds. The camera has a slow scan mode  using a ~2 second exposure. The slow scan is great for detail, but in this case it just gives it time to blur the image and the clouds race past the moon. The total eclipse was completely obscured.
Posted by danno at 00:49 No comments:

There is a scene where they are taking bear safety training and reviewing the different bear repellents available.  First was a flash/bang type shot gun round, then bean bag and graduated through to buckshot and slugs.

The scene ended with a charging bear scenario using a bear target on a movable cart.  Sarah got two shots off, both good hits before the  "bear" made it to Sarah.  Sarah then utters ".. and here is where I use the bayonet."   It was said quietly and missed it the first time through.

I think this is definitive proof SP reads StuckInMassachusetts. 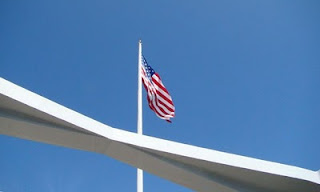 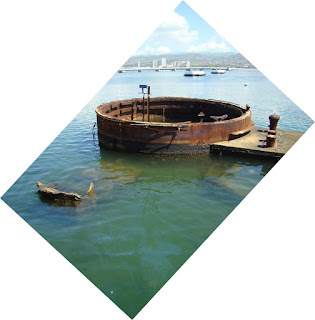 And ended here on the deck of the USS Missouri: 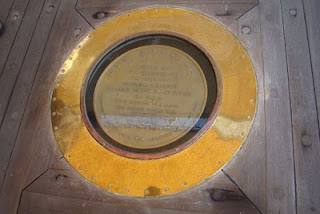 I have best job in the world!

As a rule, I do not talk about the dayjob(tm) here beyond the occasional oblique "dayjob" reference.  We have people whose job description includes "corporate mouthpiece" and it's not me.  Instead I keep my trap shut on that subject.  Today I will open it just a crack but you'll have to forgive my lack of details as they could tip off competitors and I can't go there.

I've said "I have the best job" for years.  I know this because every year I sit down in a quiet place and ponder "if I could have any job in the world, what would it be?"  And every year, the answer is "I have it and I'm with the right company".  my day-to-day activities are closely in-line with what I'd otherwise call "play time".  It's an old saying* "find a job you love and you'll never work a day in your life."  I think I'm there.  Also, Many companies mouth the words "Our employees make this company what it is" or some such.  The difference is this company actually means and puts it into practice.

Here are the few details I can share without giving too much away: I returned from lunch today to find access to my office blocked by a box nearly as long as my height - a 50" plasma TV (and assorted accessories).  Yea, my current project requires access to a BFTV!  This TV is so big it won't fit in my office.  I'm gonna have to annex an office and move out most of the furnishings to make the space.  On top of that our stock price was up a couple percent today beating the DJIA & NASDAQ handily. Double plus good!

BTW, most people in our section do this stuff at home anyway.  We do this stuff for fun, so the paycheck and office are just a reason to get us out of bed in the morning!

Don't envy me.  Do your own pondering and find your dream job, the job that pays you to do stuff you'd do anyway!  Then you'll never work a day in your life either.  I wish you the same success I've found.

* my internet search for the source of the quote turned up many.  Several cited Confucius.  Some cited others I've never heard of.  Just know it wasn't me.
Posted by danno at 00:13 2 comments: