I'm but a tepid fan of "ball" sports.  I've been given seats to a 49'rs game but brought along a Sailing magazine 'cuz I know the last 2 minutes of game play takes at least 20 minutes to play.  I like Baseball a little more, I'll put on a ball game if there is nothing better on.   The family used to split SJ Earthquakes season Tix with a co-worker.  I like Hockey more still because they do substitutions on the fly.  I like that.

But motor sports have always held a special interest.  We used to spend Saturday PMs at the fair grounds outside the fence watching autocross racing.  I even worked a couple races.  I think the Disney movies of my youth ("the Love Bug")  featured road racing in California gold country might have had some influence as well.  Awesome.  I wish these races had become a reality.  Forward to the watching the Indy 500 "Greatest Spectacle in motor racing" in prime time.

Which brings me this year to Memorial day weekend this year...  Possibly the acme of the racing season - we had the Indy 500 + Monaco F1 + NASCAR Coca-Cola-600.  Last weekend was pretty awesome close 2nd as well with F1 in Baku Uzbekistan - F1 of "Europe", plus the 24 hours of Le Mans weekend.    I was happy as a pig in slop (with the exception of the juggling of feeds to keep track of where the racing was covered).

This weekend is a close follow on...  Indy Cars are at Road America, Elkart Wisconsin!  Yea a Road Course!  Woot!  This is real racing.  And NASCAR is up in Sonoma at  (not sure the sponsor name these days.) I only know it as Sears Point!  This is possibly my favorite  NASCAR race of the season.  The track is designed and set up for "sports cars".  Not NASCARs, ostensibly American Muscle Cars particularly designed to turn left.  Still the track set up for cars 2 ft slimmer so it's amusing to watch full sized track cars elbow their way around the track.

Yea.. The VCR is gonna be busy Sunday!..  As it has been the past few weeks..

But every network is missing the "big daddy" of motor racing -  RARA (Reno Air Racing Association) and Red Bull Air Racing!  Both of these deserve more attention!  Don't even get me started on High Tech stuff that makes up America's Cup Sailing today!  (Hint "Awesome!")

FTC disclaimer - I have no connection to any entities mentioned here..  I am a motor racing fan.  While I like watching race cars doing ~150-200 MPH on road courses, I would *love* to see airplanes doing the same or +450MPH on pylons!
Posted by danno at 23:45 4 comments:

I learned the basics of Cribbage long ago courtesy of my Dad and the woman that bore me*.   It was an important tool in learning addition  ("fifteen plus eight is ... twenty three" (fast answers were rewarded over counting fingers))

As a sub teen, I recall asking Dad what's the best hand... he had to think.  Three 5's plus a jack to the  suit of 5 that was cut.  And I think he answered in the negative if he'd ever had such a hand.

A college job featured 12 hour shifts long on boredom on duty to answer a phone that a) if it rang, it was most likely a wrong number. or b) take information on a problem in the network.  Mostly there was nothing to do but wait for the phone to ring.  But in the meantime, I played a lot of games and  saw a lot of crib hands.

I've come to understand Cribbage is Poker without betting and bluffing.  You are playing the cards and not the player instead of the other way around.  But the rest of the mathematical odds still apply.  And there is no fold.
A 2 hand game starts with 6 cards dealt, discarding 2 and a cut for a community card.  It's still playing the percentages on the cut card.  I can't do the math in my head on the fly but have built up a set of ground rules based on experience which makes me a better player. 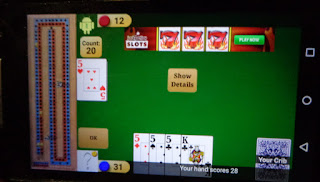 I was dealt the three 5's and cut the fourth.  The perfect hand would be the same set of 5's but with the jack of the suit of the 5 that was cut for the 29th point.

Still this 28 is the best cribbage hand I've had in ~45 years of playing.   And thank $DIETY for the internet where I can share it and my enthusiasm for the game with all of you! ;-)

BTW... I have played this game enough to have grave concerns for the randomizer...  The opponent gets the "Jack for his heels" with maddening frequency.  Still... an amusing game.

The SCSon understands that earning a university degree has become extraordinarily expensive and the military can help with that.  He is also interested in serving his country.  So to learn what opportunities are available, we scheduled a visit with a Navy recruiter.

We arrived a few minutes early to find a bolted door.  Well Marines and Army are next door.  Is it one big office or are they interconnected?  As we head toward a different door, Navy surfaces and offers us entry.  As I'm walking through the door I hear "You chose the wrong door!"  To my dying day, I will never know if was Marine or Army ;-)

I opened questioning with the recruiter...  "So do you guys have bulletproof glass out front yet?"  The recruiter responded in the negative and then indicated he regretted not having a sidearm on his hip.  I responded "I too regret *you* not having a sidearm!" (I'm the one with my back to the window).  This is a broken policy that badly needs fixing.  (the offices are also marked no weapons zone... this is also badly broken policy.)  Give me a day and I'll  add a pic.

Many family elders have gone the ROTC route so he has some history there..  The Petty Officer recruiter handles enlisted stuff but happily ponied up the ROTC coordinator info.  Contrast that with the USArmy guy with the automatic "you won't qualify" attitude.

SCSon inquires about the Navy Nuclear program (as recommended by former teacher & USN Annapolis grad).     USN Recruiter offered up all the flowery "here are all the accolades you will receive upon graduation and beyond."   But that assumes you complete the course.  This scenario reminds me of the static line parachute course I did several years ago... The first 45 minutes were "this is what will probably happen if all goes well". The next 5 hours were "these are the possible failures and how to resolve them".   This path bears further exploration.  There are some pretty difficult sections of the Nuclear program (see also Thermodynamics)  What happens if he fails at one of these points?

I was amused when the recruiter put the question to the SCSon "are you ready to sign up today?  (it's on the form)"  Answer "No!"  This is day one of the exploration.

It was also a teaching moment...  The form asked for three contemporary references.  I reminded the SCSon it is customary to notify potential references and ask permission ahead of time before listing them.    In this case , as the references are all JROTC contemporaries, it would probably be sufficient to notify them "hey so&so may call... speak well of me!"

We are neither pushing pro or con.  It's his choice.  He has several relatives with history along the same lines.  I think he'd  experience either pro or con and want to share with the SCSon,

The SCSon called me at work today.  "Hey what'd you get on the SAT?"
Me:  [redacted - the actual score unimportant to the story]
SCSon:  Hey, Me Too!   (apparently his results arrived today in the mail)

True story - we tied scores for the college entrance exam.  Though the split is significantly different.  My score was about 2/3's math, 1/3 english.  His was 50/50 even steven.  Go figure.  My english teachers didn't earn much respect while my math teach's did...  The feeling was probably mutual.

Then again... I did fine with Eng 1A in college... (and spelling has never been a problem.)   so where was the problem?  Oh and I later had an 8 year run of a monthly column with very few editorial corrections...  I bet none of them ever had a word in published on print.

I received the "we tied" news with a little sadness.  Going into the test I wished him to beat my score and told him same.  Today I am sad that he didn't but proud that he tied!  Good onYa!
Posted by danno at 21:57 1 comment:

He requested a trip to the range.  Hey good idea... I'll take the afternoon off and we'll enjoy a quiet day at the range.  What do you want to shoot?   "The Garand!" (apparently that was a dumb question) 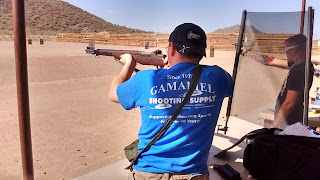 We also shot a couple ePostal entries.  Dang this was a tough target!  I had a near miss on a bomber but the thin white line rules against the hit.  All my targets scored nil, but you'll see them in the results anyway.  The SCSon had a couple hits.

PS.. Congrats to Gamamiel on the free plug.  FTC disclaimer We have not received any compensation from them, save for buying a really quality and comfortable T at a fair price.  In fact buying this T is the only business we have ever conducted with them.  This T just happened to be at the top of the stack as the SCSon dressed.  And thanks for seeing what a quality T-shirt really is - inexpensive advertising!  In quantity, you made a small profit in selling me the quality T, and now you are getting a free web plug.  Small businesses take note!  Offer me a quality T shirt at a reasonable price (@cost or slightly above) and I'll buy us one each.  Never know where the pick might pop up!

PPS.  The green strap across the SCSon's back in the above pic is a bandoleer of 10x 8 round Garand clips.  For the sake of authenticity, natch.
Posted by danno at 10:08 6 comments: