I'm a MovieBlogging virgin but what a flick to start off with. TCM tonight drug me in with "The Odessa File". I recall the book on the camper bookshelf.  The title sounded ominous and I probably read a few pages but don't recall reading the whole thing. I tuned in tonight thinking it was a different story.   [standby while I recall the other title].  Gotta love TCM for no commercials and leaving the flick intact, four letter words and all.

Following that TCM ran "HopScotch" unedited and without commercials.

Holeecow, this alone was worth the cable bill for the month!   If you look in the dictionary under "intelligent comedy", "Hopscotch" should be listed!

Of course I cannot endorse the movie gunnie-fu in any shape or form.  (is Danny Glover a WM protoge?)   Throughout the flick WM presents as a nonviolent gunhater.  He even congratulates a former colleague for carrying his gun unloaded, after WM uses said unloaded gun to subdue said former colleague!  (see above -- former colleague knew of protagonist's aversion to guns and also knew his gun that protagonist that now had his gun is also unloaded but put up no resistance).

Ok, it plays the CIA as bumbling fools and Walther Matthau as the uber-agent running (and flying circles) around the agency[I doubt the portrayal remotely resembles reality].  But the flick portrays it masterfully!!

The flick is copyright 1980 so you probably won't find this in your local redbox, nor will you find it on BluRay 3D, but if you've got a couple braincells to rub together it's worth tracking down in whatever OldTech format you can find.  The story is worth the ride.
Posted by danno at 00:48 No comments:

I just had a brainstorm... Assuming Mr. C allows me an ePostal match in the coming year... heh heh heh!!!

oh please oh please let me have a slot.... this should be fun!

Cats and Dogs, living in peace

If you asked me last week to name an issue that would have the whole of state government speak with one voice and unanimously pass  the legislation and the governor would sign, I could not have come up with an answer.

Tonight we have the answer "West Borough Baptist Church".

When I read they were planning to protest, I thought "What pigs".  How could you possibly make a case that the killing of an innocent 9 year old is a good thing.

Arguably the most polarizing figure on the political Left is Kristen Sinema.  She's out in front of any issue and she's loudly leading the left.  On the right we have Randy Pearce who most recently made political enemies leading the SB1070 fight.

These two could not be anymore political opposites.  But they and many others  saw the need and sponsored the bill.

When the state legislature stands united and says "we shouldn't have to pass this if you had a shred of human decency.  However you have proven you don't so we have to act."  That should be a clue that you  are not just on the fringe of society but completely off in a different dimension.

Tonight I am proud of my lawmakers.  Good on ya guys!

Sometimes the problem is obvious...

The heater blower in the car went inop a while back.  Normal checks were inconclusive.    Blowing the fuse must have been a recurring problem because the car ships with a resettable fuse (circuit breaker?).  But that hadn't popped. 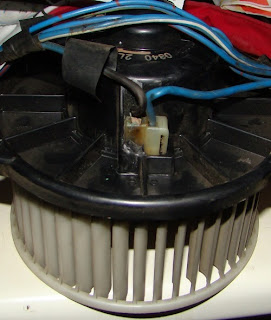 I kept thinking it was a bad starter interlock relay or bad connection.  But the tests all showed good connections.  Finally I pulled the motor out and the problem became obvious. While installed in the car, this connection is only visible by standing on ones head and using an inspection mirror.  The connection to the motor developed a bit of a "high" resistance connection which gets hot.  And once the heat starts, the metal parts corrode and the resistance goes up.   This connection eventually became hot enough to melt the nylon connector and plastic housing together.  Oh and the insulation on that wire is supposed to be blue.

The good news is the motor still works.  All I need to do is cut out the cooked wire section and splice in a new wire & connector.  Then clean up the corrosion on the connector and reassemble the parts.  From here it's a twenty five cent fix. 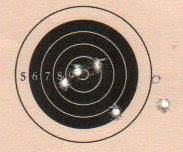 The SandCastle Son started with the Junior rifle division at our local club. The club runs what looks like a very successful junior program. They train for Olympic four position shooting (prone, sitting, kneeling & standing). They provide everything for the juniors: Shooting mat, jacket, glove, targets, gun, coaches, etc. Even ear plugs in case anyone forgot hearing protection. The best every year go to Camp Perry and a one or two every year go on to the junior Olympics.

The program is open to all comers. Tonight we were the only club members out of a class of 8 shooters. Some come to fulfill merit badge requirements, others come for their own reasons.

They start noobs first making sure they have the sight picture, then shooting off a rest. I suspect once they start shooting tight groups, move them into the different positions. Tonight they set the SCSon up with a nice target rifle and he turned in some decent scores in the mid to high 30's out of 50 possible. Not bad considering the ammo was random headstamps. Some I recognized (Federal, Winchester, Remington), some I didn't. Here is his best target of the evening...a 39/50. All scores were in the mid-30's with a 20 minimum score (scores below the minimum are not recorded).

Interestingly, the coaches scoring the targets use complementary math.  Instead of directly adding up the scores, they add up the differences between perfect and what was actually shot.  For example, the target here scores as 0+1+1+3*+6 = 11.  50-11 = 39.   As the shooters get better and most of the shots are 9's & 10's the complements are 0's and 1's which are pretty easy to add up.  Makes complete sense!

SCSon wanted to bring a rifle from the SandCastle Armory which offers a couple appropriate choices. One is Grandpa's Springfield 84C equipped with Redfield sights. There is also a Danish target .22 with a very light trigger pull. I opted not to considering the possibility the club could easily have a better rifle to loan!   I begged for a dry fire on the SCSons rifle and couldn't feel any take up. They estimate the trigger pull in the ounces range and I believe it!

CMP currently has Kimber 82 target rifles (surplus/unused) for $600 and we may pick up one of those.  Or maybe we'll see if he sticks with it and go straight to an AnSchutz  a couple years down the road.

What I want to know is "where the HELL was this program when I was a kid?**" Back then I wanted to learn to shoot more than anything, but mum was vehemently against guns. "gunsRbad" She may as well have been Sarah Brady herself. Even capguns were verboten. I went so far as taking NRA Hunter Safety from a teacher I *hated* just for the opportunity to shoot once (and we never got to shoot).  With a couple decades hindsight, I'll give him props for offering the class in a Junior High School. Today that would be clearly into the nospeak category.

* Possibly being generous... 6/7 is  a judgement call but especially on a first night I think being generous is a good call.
** Another possibility is a very similar program existed back then but the 'rents didn't want me involved for any number of reasons from irrational fears of risk to doesn't fit with social schedule.
Posted by danno at 22:15 1 comment:

The SandCastle Queen has a rolltop desk for sale. Going on Craigslist tomorrow, sneak preview tonight here at the SandCastle. $200 as-is, where is.

I don't think it's an antique. But it's real wood not pressboard or anything cheap. Email sandcastle scrolls at msn dot com and I'll connect you to the queen who can answer questions intelligently. 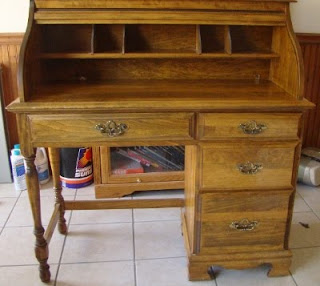 Update: I was only going to post the one pic but what the heck... I'll throw in this one only because the cat was hiding behind the desk, sort of. 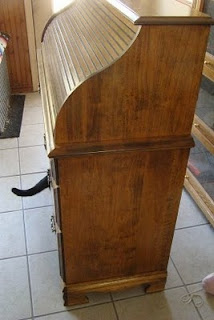 New Years day broke clear and bright. It snowed a couple days ago.  I took the opportunity to fly out and get some pictures of the snow swept peaks. This is four-peaks on the East side of the Phoenix Metro area.  If anyone wonder's why we put up with months of triple digit heat, I hope these pics explain the answer.  The short version is "Yeah it may be hot, but I don't have to shovel it off my driveway!"

Mount Ord, NorthEast of Phoenix.  There are a couple repeaters on the left two towers.  The right most tower is a fire spotter.  Probably only a couple inches of snow but I'd hate to have to report to the tower even now a couple days after the snowfall. 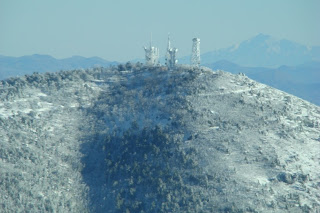 Happy new year. May it be a darn sight better than the last!
Posted by danno at 23:35 No comments: