Supposedly there are guns in this sequence of pictures, but they are surprisingly difficult to spot ;-)

Seriously though, They obviously drilled the models on the four rules.  So I'll assume pic 10 is not a rule 2 violation and instead is just an artifact of camera angles.

Nicely done!
Posted by danno at 22:16 No comments: 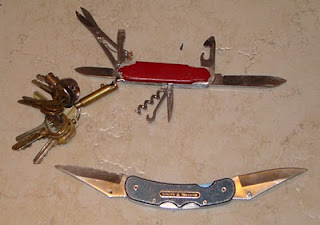 That's a Victorinox on the keyring.  No I don't know which model.  These take a beating in my pocket.  I'm sure I could trade it in for new under warranty but I figure it's "cost of doing business".  I'm not sure the use of the hook or the 'drill' pointing south in the picture, but the corkscrew is top notch.  I have opened many bottles with the corkscrew and it's sure fire.

The blue knife is my Smith & Wesson.  It's made in China so don't be too impressed. IIRC it was about $12 at Big 5.  Straight blade on one side, serrated on the other.  It's solid enough that it's  the first knife I reach for and cheap enough to walk away from should I accidentally walk away from it.  There have been a couple scares already and it's cheap enough I can write it off without a lot of heart burn.

BTW, Breda broaches the subject of cheap vs inexpensive.  When it comes to knives, it's the quality of the hinge.  If the blade wobbles, it's cheap.  If it's low cost and the blade is solid, it's inexpensive!  The S&W is inexpensive, but cheap enough that I won't lose any sleep if I lose it.

I carry the S&W in favor of other knives in the harem, including  an NRA blade picked up at last year's Friends of NRA dinner and several straight blades.

What's in your pocket?
Posted by danno at 01:15 No comments:

A race plane at the Reno Air Races crashed into the spectator area.  Video here at around 39 minutes (not for the squeamish).

I pray for the wounded...

2204 Update: 3 dead.  One of those is the pilot leaving two spectators.  That my friends is a miracle!  Prayer for the deceased and the families there of...

Update 9/18 2117:  The death toll has risen to 9, one was a local.  His dad is still alive but in critical condition, I pray he pulls through.  I am still thankful the accounting is so low, but I will not be surprised if it continues to climb.

Here are the results of the August ePostal match. As one of the competitors observed, larger bullets make the 4's easier, but the 2's harder.

Thanks to everyone and drawing winners will be notified in the next few days.