I used to live and base SCS-1 on the North side of the Phoenix metro area.  Back then flying up to Sedona was as easy as falling off a log as there is nothing but Class E airspace between the two.  The attitude was something of "Oh look.. 'tis a day ending in 'Y'... lets have lunch in Sedona!" 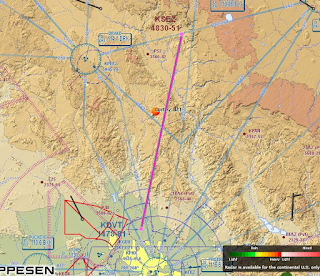 Now SCS-1 is based on the southside and there is a whole lotta complex airspace in the way.  The SCSon yearned to visit the airport.   And for good reason.  The airport is kinda of a special one in that it's up on a mesa, and likely the closest most of us will come to a carrier landing.

We tried for last week but the winds were reported as 16G20 80 degrees across the runway :-(   Abort - SEZ is no place to visit with high winds in the vicinity.

Today we are seeing VRB-003 even though winds aloft suggests perhaps otherwise.  At least this gives us a window.  So we depart (SCSon PF, me Navigating) northbound and stay at or below 2500 to stay under the Phoenix Class Bravo, then climb through the Scottsdale class Delta (In radio contact and with their permission".  More complicated but still doable. 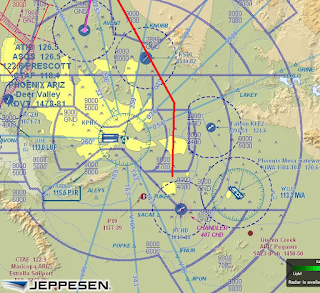 The flight up to Sedona was uneventful though rather bumpy with the turbulence of the winds over the mountains.  But the red rocks were beautiful as ever. 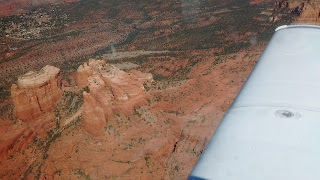 And here we are Wheels down @ SEZ. 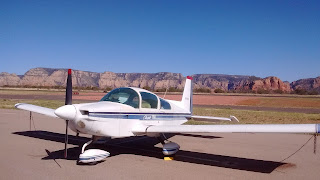 On the return leg (Me flying, SCSon Navigating) we contact approach and get flight following just east of Cottonwood..  I'm surprised Phoenix TRACON has RADAR services that far north.  I'm old but willing to learn.

We had a bit of a hiccup where we were given a radio handoff...  And we called 3x.  He was kinda busy so we didn't sweat it.  Then he called us. and we responded... to no answer.   We called asking radio check - no answer.   OK flip over to the other radio where we finally re-established contact.   The radios are both Icom A-200's though one antenna is on top while the other is on the belly.  The belly antenna has less "vertical" than the top antenna.  That might have been the difference.

As we near ~30 north PHX, approach clears us into PHX class bravo..Meaning we don't have to worry about the class bravo shelves, everyone else is above you.  Eventually they clear us direct DVT @ 5500  then for the EAST bravo transition. 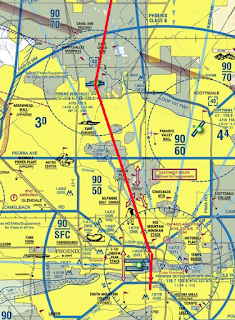 Keep it east of the runway threshold but west of the freeway.  Clear of the corridor once south of the freeway.  Request direct destination, granted "Remain on transponder code, contact tower".  And we do.  That left us a bit high for the destination arrival but we made it work out.  Still....Arrival "uneventful" and that is the best answer to the question of how was the flight?

A Great flight!  The SCSon logged 1.3 (uphill and upwind).  I logged 1.1 downhill & downwind.   That choice was not an accident.

How was your Saturday?   I score this one a home run!  Now excuse me as I file an ASRS report for the altitude deviation in the Class Bravo :-(  Unintentional, My Bad and fixed it immediately before the controller said anything...  Still gotta file.

I only regret I don't have any BofA accounts to close... because I came to the conclusion that BofA stood for Bank of A$$holes about 45 years ago and closed all my accounts then!  And actively avoided them since.  Now they have gone political with the decision not to finance ar-15 manufacturers.

It did result in an uncomfortable moment at a summer party where the host offered a choiceof many cozy's to keep one's drinks cool.... many featuring BofA themes.   I spouted off with my 45 year opinion of the  company: BofA = "Bank of A$$holes"

Had I known our host worked there, I wouldn't have brought it up.  That's just being social... But it doesn't change my opinion of the company.   They have had no business of mine for 45 years running!  I said Alpha Mike Foxtrot before I was 10 and haven't looked back.