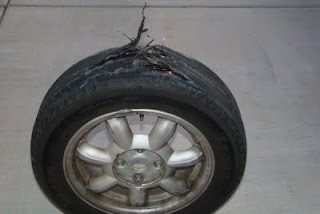 This has been a big week at the DayJob(tm). We spend a significant portion of the year preparing a week's worth of technical training for our customers. While we enjoy presenting them, it's a lot of "on" time. The schedule had my last class wrapping up at Noon Friday. Between cleanup and lunch - a chance to meet with our customers in a less formal setting, I was done by about 2pm.

Heading out on the freeway, there was a definite vibration in the car at speed. I figured a tire had thrown a wheel weight and a simple re-balance would fix it after I was home. Halfway home the steel belts let go. I was in the middle lane and another car was between me and the emergency lane. I hit the blinker to indicate my desire for the shoulder. The other driver immediately backed off giving me have the lane. Thank you! You are far more aware than most drivers.

BTW, the Air Temp was about 110F and there wasn't a bit of shade in sight. The tire was still inflated which allowed limping off the freeway to a WallyWorld at the exit. At least there I could get out of the heat and a cool drink while waiting for rescue. Oh, and I checked the ammo supply while there. Scoring a couple Federal .22 bulk packs would have at least made the diversion worthwhile. Nothin' but 12ga. shells.
Posted by danno at 20:37 2 comments:

If I make it to GBR n, I am definitely making time to do this!

A couple years ago (pre the Obama market crash) we had a swimming pool installed here at the SandCastle. The best part of the process was the when the people digging the hole in the ground talked us the though the excavators controls and let us dig some dirt. Ho ho ho! What a blast. Move the one joystick Left or right to rotate the cab and arm. Fore and aft on the joystick retracts the arm, fore and aft. The other joystick controls up and down on the arm. Left and right runs the scoop in and out. I have never been so happy to pay a bill in my life.

Now imagine driving a locomotive! SIGN_ME_UP!
Posted by danno at 22:31 No comments:

Labels: GBR n, To Do this life

This picture was taken from 11,500' MSL on the V105 airway very close to the Beatty VOR (see below, lower left corner). The dry lake in the lower right corner of both the photo and sectional is Yucca Dry Lake.

Nope... I don't see anything either. But that is not terribly surprising since Groom Lake was about 60 miles distant and the picture was taken with a midrange digital camera through a less than optically perfect window. Reference the sectional below, Groom Lake is the dry lake within R-4808N in the upper right portion of the sectional below. 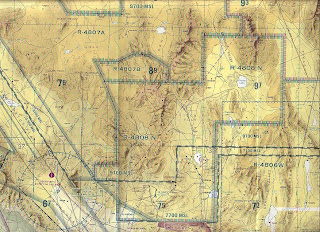 You could probably do better with a more powerful plane at FL250 or so and a $Million camera. Me, I just happened to be passing through and considered how it might spin the wheels on the sitemeter.

Consider this my "Post Everyday" entry for today.
Posted by danno at 22:59 2 comments:

A couple of events came together last week which spurred an impromptu couple days away from the SandCastle. First was a re-invite from the SC'rents to join them for their timeshare week at Lake Tahoe. A sibling unit & spouse were supposed to go but their trip was pre-empted by the dayjob(tm). Second was a local weather forecast that started the week with 115F and nothing lower than 110F for the entire week. Last was a lull at work before next week's storm.

With that we took the opportunity to escape the desert heat for the cool mountain air.

Locals were grousing* about the daily high temps in the mid 80's. Needless to say they didn't get much sympathy from us as we were enjoying the 25-30 cooler temps than at the SandCastle. It felt great to us and the night time lows bordered on requiring long pants.

Lake Tahoe Sunset (as always, click on image to enlargify)

* The sun is more intense at Lake Tahoe. The lake is about 6200' elevation which means there is about 15% less air and a whole lot less smog between you and the sun to absorb the UV rays.
Posted by danno at 19:16 No comments:

The Sky is falling! 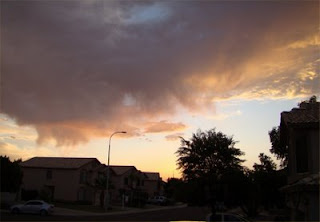 ... Actually it's Virga - rain falling from the cloud but evaporating before reaching the ground. Weather here in the land of the SandCastle has been hot and dry, (114/11%) according to the National Weather Service. There is moisture in the upper levels of the atmosphere, but the lower levels are dry Cloud bases are 10-15,000 feet, and the rain just doesn't have a chance.
Posted by danno at 21:28 No comments:

I never get tired of watching our rockets launch for orbit. Today was the 6th attempt to launch and this time was the charm. Several attempts last month were aborted on count of hydrogen leaks. The last 3 attempts were scrubbed for weather (thunderstorms within 20miles), Today the storms held off for the launch window.

I had a meeting scheduled during the scheduled launch time, but instead did what any self respecting nerd would - Took my laptop into the meeting, fired up WiFi and got video feed from NASA TV and watched the launch from my corner of the room.
Posted by danno at 19:27 2 comments: 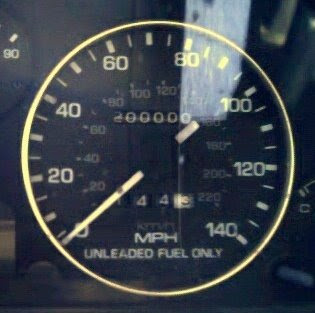 The odometer rolled over 200,000 miles. Not a record or anything, but also not something you see every day. This is the second one for me. The first was a 1976 Datsun Z car that I still have, now with 237k miles.
Posted by danno at 18:16 No comments:

Labels: To Do this life

151 posts since then... That's below my goal of one every other day, but there it is.

Thanks to my loyal followers. sitemeter shows a handful and I suspect there are more following via RSS. I'm still having fun and looking forward to year two!

She has until midnight to veto several more bills, SB 1168 (Parking lot storage) and SB 1243 (Defensive Display) otherwise they become law without her signature.

Update: NRA Board member Todd Rathner reports on NRANews* that Gov. Brewer signed the other two bills as well.
This has been reported by several local news outlets but still no official news from the Governor's office.

* click on Program Archive, then look for Todd Rathner under the July 13 tab.
Posted by danno at 18:05 No comments: 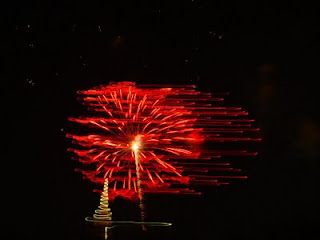 The camera (Sony DSC-H9) has a "fireworks" setting. It does a nice job of capturing fireworks. It uses a ~3-4 second exposure to capture the image. That means getting the images is a somewhat a matter of luck in aiming, timing, etc.
In this case, I accidentally bumped the camera during the exposure. Still it's an interesting effect, where the Red explosion is completely bumped, the rising shell on the left documents the dampening of the bump. 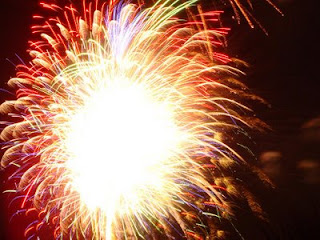 This is the Grand Finale. The volume of fireworks and proximity completely washes out the shot. Lesson: this setting is works well for most fireworks, but the grand finale really requires the video setting. 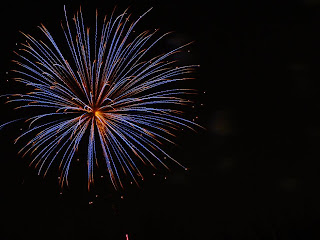 These shots require a tripod to hold the camera still during the multi second exposure and a remote shutter release to avoid bumping the camera during exposure. I was having trouble with the remote trigger* and instead used the release on the camera. This shows the unfortunate result.

* I suspect the problem with the remote release is that it works via Infra Red and the sensor is on the front of the camera. But the camera display which you have to monitor because it takes 8-10 seconds per shot is on the back of the camera.
Posted by danno at 22:49 No comments: 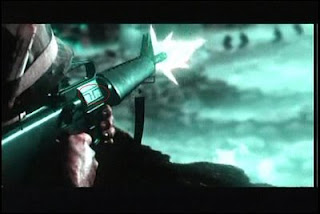 Apparently the animator used on the Sun Tzu program is not a gunnie. Note the closed dust cover amidst the full auto fire. The left hand position on the mag well is also a bit odd.
Posted by danno at 23:45 No comments:

What R U thinking? 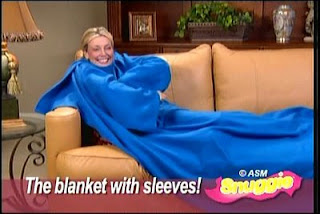 Relaxing tonight watching Sun Tzu on History International. This ad is on fast rotation. What are you thinking?

It's July. The desert home of the SandCastle is pushing daily high temps of 110F and even the night time lows are in the high 80s/low 90s. Heck the water in the unheated pool is north of the 90F mark this time of year!

Ok, it's satellite TV so the ad is targeted at a country wide audience. But this time of year, even the occasionally frozen parts of the country are pushing the century mark with humidity to match. Your message of "wrapped up cozy and warm in a blanket on the couch" just doesn't fit. It's only the multiple C-notes per month to the local utility keeps temperatures down to the tolerable range.

What market are you targeting? On what planet does this make sense and how is the weather there?

Update: The SCQueen tells me Target is pushing these hard in the local stores. In other news the local forecast calls 116F on Saturday.
Posted by danno at 22:00 3 comments:

Happy Independence day! (As always, click on pics for full size). The red and green lights at 4 O'clock outside the explosion radius is an airplane -green left position light and red beacon. 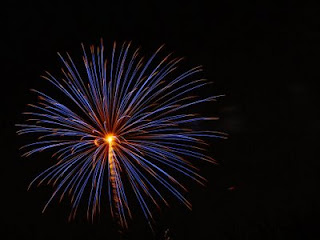 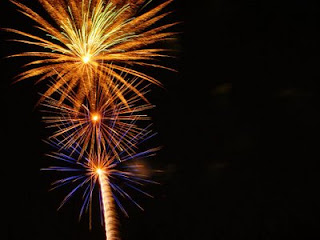 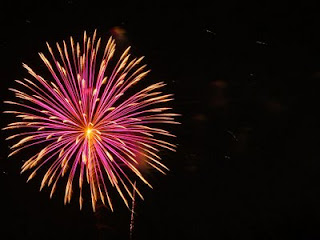 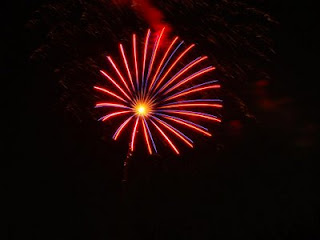 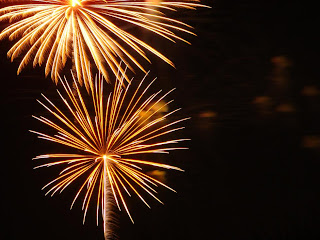