Don't try this at home!

Just don't: Short version: 13-YO injures himself with a homemade shotgun.

A better headline might be "13-YO get's a first hand lesson in Newton's third law".

There is simply no need in this state for a 13-YO to make his own shotgun when there are so many proper youth opportunities available.

Right there in his home city of Buckeye there is an SCTP program. $75/yr covers everything the student needs: coaches, shotgun, shells & birds. Everything an aspiring shooter needs!

The SCTP program will explain and enforce the safety rules. Embrace and abide the rules and you will have a safe & fun time. Reject the rules and expect to be quickly ejected from the program, for everyone's safety, including your own.

I more "listened" than "watched" "the debate".  "Tried to listen" would even more accurate.  The ambient noise level was pretty high so I missed a lot.

But when I was home and back on the computer with the "debate" on in the background.

Are these cartoons still on the air?  If so, he's toast!  No one in their right mind could cast a serious vote for that voice! (even if he used Goldwater or Reagan's words)


* "debate" is in quotes because this wasn't really about defending ideas... it was more of a scripted photo-op with live press releases.
Posted by danno at 22:08 No comments:

I don't remember when I started reading Machine Design.  It's a trade publication for engineers.   I think they published an "article" penned by moi.

After a couple issues, I made sure I was on the subscription list.  Not necessarily for the articles but for Ron Khol's editorials!  I even won an NRAnews "contest".  I forget the details....  A very pro-gun ruling had come down and Cam offered up an NRA cap to the first person who could come up with a pro-gun editorial in the local paper.  My local East Valley Tribune ran one of Ron's pro gun columns.  (I declined the cap on the basis of the only difference between Cam's and my hairline is the blade we trim with.  It also served up an excuse to pick a runner up ;-)  You're welcome!

Anyway, I caught on to Ron Khol fairly late in his career.  He became editor in 1983, I became a subscriber after the turn of the century.  Somewhere along the line his publisher Penton Media collected  a  set of his writings into a book in 1997.
Unfortunately he's since died.  Cancer, I think.  He wrote of becoming a "voracious consumer of healthcare" in his waning years.  Lee Teschler has since taken the reins as MD editor.  And he's good too...  Hi Lee! Ron left reallly big shoes to fill.  And you are filling his shows well.   We are linked in.

Somewhere along the lines I became aware of Ron's a book,  It was out of print before I knew it existed.  I'd checked online a couple times but came up empty.  The SCSon recently bought it up again and the internet search came up positive! 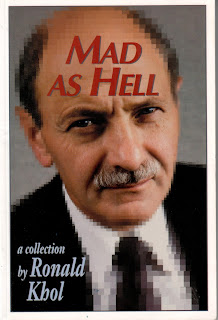 I am now the proud owner of a VG copy!  My biggest regret is Ron is not around for autograph duties!  (Pixelation is in the original)

Ron - I miss you and your editorials..