Primary day is finally here in Arizona.  And for once our votes will count!  Usually it's all over but the crying by the time we get to cast our ballots.

I voted 3-4 weeks ago and I'm really glad I did.  Just drove past a polling location and the lines are out the door and down the block:

The SandCastle Queen reports she was at the polling location when it opened.  The lines were pretty short at 6AM ;-)  I'll be glad when this day is over.  Local TV has been unwatchable as it seems nearly non-stop political ads.

Update: 2130: Driving by the polling site around 1830 the line took the dimensions of the red line.  The Google Maps measurement tool puts this path at  >1000 feet.  At ~2100, 1 hour after the polls had "closed" (these people still get to vote), Media has already called the state for Trump & Clinton the end of the line stopped at the green dot (~650 ft).

This for a ballot with one question.  Someone said the voter check in process was taking a couple minutes per voter and that was the bottleneck. 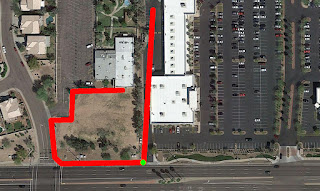 P.S.  This is one of the reasons I voted a month ago!  Recall the six P's: Prior Planning Prevents Piss Poor Performance!  I planned ahead and thus enjoyed my relaxing evening.  You didn't and ... enjoy your queue!  (I chose wisely!)