Sporting Clays is sometimes described as "Golf with a shotgun"  And the analogy is apt in many ways.

Both events are something of an endurance race.  It's not just the ability to hit the targets, one has to carry the gear while walking the course.  And always in the heat!

A first step to alleviating the load is carrying the gear in a hand cart instead of over the shoulder.  (The ultimate is a motorized cart but that's beyond...}

Commercial carts are available but run about $300.

The SandCastle Queen was out shopping at a local goodwill "just to get out of the house" and spotted an old "jog behind stroller" for an Andrew Jackson.  I said "Buy It!"

So the weekend task for the SandCastle Son and your humble host was to transform this: 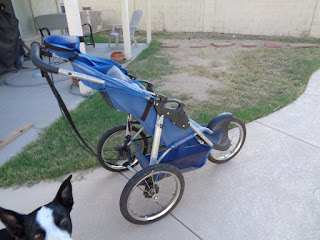 a "jog behind" stroller into this: A shot gun roller. 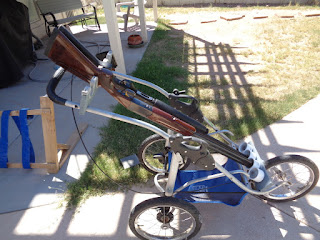 Carries 4 shotties and plenty of room for a cooler & shells.  We even added cup holders after this shot was taken.  It even folds in half for transport (stay tuned for folded pic).

Total all up cost (including the drink holders), around $50 (tax included).

But my real motive for tackling this project was to teach the SCSon to use power tools safely: eye protection, and never let go of the work piece (or clamp it to the table)!  He fabbed the bottom rest which required trimming with a power saw and notching with a hole saw on the drill press.  Also drilling holes in the PVC caps and laying them out on the final piece.

I took wood working and metal working in 7th & 8th grade, plastics in HS and welding in Jr college.   The SCSon's HS doesn't have any kind of industrial arts on site!  If you want to learn those skills you have to go to a different school for those classes.  This was a huge shock to me.  What a disappointment.   These are valuable life skills no matter whether you intend to make a profession or not!   My HS had wood, metal, plastic and auto shops!  Seems someone today sees different.

I re-installed the "baby seat" for storage.  We may design and sew a new storage area in the future, but this will do for now.

Bonus: the SCSon learned to adjust a bicycle brake!  Yet another skill we learned by age 12 in the day but now.. not so much.

The hard part was finding the stroller at a reasonable price.  New, they are $300 easy.  Used they typically run $75+.  This has some corrosion which knocked the price down.  So far the tires hold air but even if we have to replace tubes, we'll still have a nice cart for far less than a C-note.  And hopefully the SCSon's power tool lessons will last a life time.

And many years down the road he will remember building this cart with dad.   *priceless*

I can only hope.

Happy flag day.  We flew ours, did you?

I didn't go looking for a project.  I was just trying to help.  Really!  And it was a chance to play an easy joke on the SandCastle Queen.

The FMK stripped lower was up for auction at a recent Friends of NRA dinner.  The thing about an auction is that it takes two bidders to get the price up.  One person might be willing to pay Big$$$ for a given item.  But unless there is someone else willing to pay Big$$$ - a little bit, the price will never get there.  So especially on charity auctions I'll bid just to keep the action going.  Here the bidding stalled at too low a price so I bid.   And then I was outbid but by then the price was more than fair so I bowed out.  And there were no more bids.

Then the auctioneer came over and asked a question I've never heard before:  "If I accept your 2nd place offer, how many would you buy?"  Remember I bid just to get the price up.  I wasn't really looking to purchase.  But I ended up taking a lower.  I could have gotten something less expensive online but by the time shipping and FFL fees are included, this price was in the ballpark.  I got an OK deal.  They sold a couple more at my price and the  committee made a couple hundred extra $$$ for the bid.  My work is done.

Plus I got to prank the SCQueen - She & the SCSon left early for a SCSon event.  I texted her "I bought a gun in the auction".  Which is technically correct - the lower receiver *is* the gun as far as .gov is concerned, the fact that it wouldn't expel so much as a popcorn kernel without extensive additional components not withstanding.  The SCQueen responded with an eye-roll... (heh.. score!)

So then came the question of what to do with it?  I figured to drop in a lower parts kit, add a stock and a finished upper.  A 9mm carbine was one thought, but researching that suggested some special parts are required in the trigger group and the finished uppers were in the $7-800 range.

Before I finished the research down that path, Midway made me an offer I couldn't refuse: A Bushy 16" A3 upper for ~half the price others were asking...  This is exactly what I had in mind, 'cept in .223 instead of 9!  I canbuy an awful lot of .223 for the price difference.  I can live with that!  I quickly added the stock & DPMS lower parts kit to the order to finish the project.  That offer sold out in less than a day and it now shows "out of stock, no backorders". 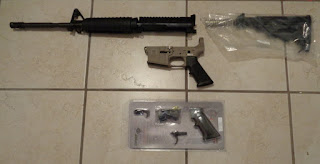 The parts arrived today.  Should be a fun project for the SCSon and I.

The SCSon is amused.. this build closely matches the airsoft rifle he acquired earlier in the year, save  for the black flash hider in place of the broken orange!

The SCSon and I hit the range with the May ePostal as a primary objective.  Hope you did as well.  The SCSon will be out of pocket for the next few days so get your targets in by Friday AM so he can post by the weekend.

I shot 5 targets but haven't reviewed them to check scores. I might have shot more but .22 ammo is a rare commodity these days!

Update 6/1
I reviewed my targets tonight and here are my best two (different guns):
Ruger Single Six:  a lucky hit on the ME-262 was cancelled out by an unlucky shot on the #2 engine of the center B-17.  That left the shot on a Bf-109 for 10 points: 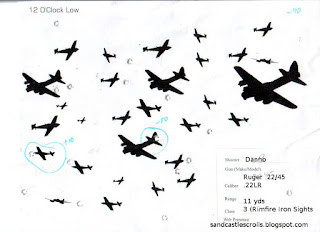 I really need to appeal this to the match master.  After all we all know the B-17 took a lot of damage and still made it home, particularly including several examples of returning sans rudder ;-) ;-) ;-)