A close family friend's mom is interested in learning more about guns & shooting and related same at a recent holiday party.  We had previously taken Dad & Son to the range & Dad had shot in the USAF.  But Mom had zero experience.

We met around the kitchen table and started with "this" is a cartridge and it consists of 4 parts (Demonstrated hands on with a projectile & brass, but no primer or powder).  Over the next hour we talked about the four rules of gun safety,  calibers, single/double action, safeties etc.

Then we took her to the range. 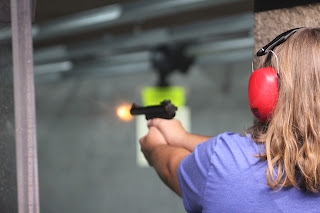 Their son is a big time airsoft guy, most often with his AR-15. But this was his first experience firing live rounds! 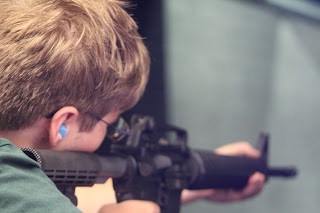 I can't show the smiles because I don't have permission to show faces.  But I also think most of you get the picture!

I'll even put an unpaid plug for the range.  We shot today at C2 Tactical in Tempe AZ.  The rule is "three people on a lane" and I get that.  The range is a cramped space, it's not fair to others and [other valid undocumented concerns].  I paid for 2 guests but they allowed us to tag team people on and off the range thus we were able to get Special Guest Mom, Dad & Son + SCSon all a little trigger time.  They seemed to have two range officers on duty but they weren't overbearing.

And I'd like to thank the guy on the next lane over shooting a Glock.  I had explained the Glock safety to Mom, but he had one and I asked him to show her the safety.  HE HANDED ME THE GUN to let me show her the safety on the range.  Thank you!  Seeing is believing!  Now she doesn't have to rely on my words, she's seen the safety in real life and better understands how it works.

Closing word is Mom was OK with the .22 but didn't like the 9mm's  And she didn't really like the semi autos ejecting the brass.  The lanes have hard sides so much ejected brass bounces back onto the shooter.   Fortunately it occurred to me to warn her against wearing anything low cut ahead of time (and she didn't), but it was still enough to be a distraction to her.  I think she'd be happier with a revolver.  Unfortunately most of the SandCastle Arsenal is semi auto :-(

Unfortunately while there are caliber steps between .22 and 9mm (.22 mag, .25, .32 and probably others), the SandCastle Arsenal doesn't have any examples, and filling such holes in is pretty low on the priority list.

I hope mom continues.  I pointed out the range has Ladies Day (Mondays 2pm to close with free range time).  I hope she'll invest the time in Ladies Pistol 100 class.  I expect it would cover most of the same stuff we did at the kitchen table but at greater depth and get her more shooting time.

Hey and I got to shoot a couple rounds too (about 5)!  Bonus for me!

(Photos credit SandCastle Queen, copyright 2017 And BTW, the first shot is not photoshopped.  She actually caught the fire out the muzzle.  Nicely done!)

SandCastle proper picked up stakes and moved a while back...  It took a year but we finally vacated the old bones and moved on.  Today we closed on selling the old property after a year of double utilities + and worries about squatters moving into the vacant property.

We also found ourselves in the uncomfortable position of July 3rd (Monday where Tuesday is a holiday) and no insurance on the property!  Even though we are local and visit the property daily, it was hard to procure coverage.   Now that worry is gone, and double utilities payments are gone!  We are FREE!

This was all part of the plan, except the plan called for a 6 month switchover instead of the 1 year +.  In reality,  The SCQueen was on top of the move and if there was a "long pole" it was me...

Bottom line, WOO HOO!  The old property has been sold!

The Dan of Steel is down to one, Walter Becker of Steely Dan has died.

I don't often get emotional when $ENTERTAINER shuffles the mortal coil.  But a few have earned deep respect and the duo of Walter Becker and Donald Fagen comprising the heart of Steely Dan really have.    I'll put them up with Queen & Styx o were classically trained and wouldn't put up with anything less than perfection from their hired musicians.

I might speculate on how "difficult" they were to work with(I wasn't there) but one cannot question the product!  They produced the sound at the end of the process is unrivaled!

I'll log their melodies and bass lines with the mathematic precision of Mozart.   Though, IIRC some recordings of "Reelin' in the years" there is a pause before the 3rd guitar stroke of an eighth maybe a quarter beat late.   And it's absolute genius!

GodSpeed  WB... And thank you for the discography you have left behind,  We are all better for it!