Once upon a time, Tempe (AKA Berkeley on the river Salt) had a lake. Well actually they didn't have a lake but they really really wanted one. So they installed inflatable rubber dams on a two mile section of the Salt River where it flowed through Tempe and decreed it a lake. It is seen here as the backdrop of a Tea Party event a while back. 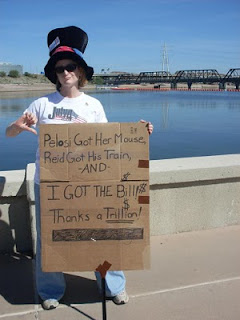 The politicians crowed the inflatable dams would last 25 years or so. But the fine print showed the manufacturer wouldn't warranty them for even 10 years. So here it is ~10 years later and here is the "lake" today. (Click on the image to reveal the full panoramic splendor of the "lake" (now swamp).

And here is why: 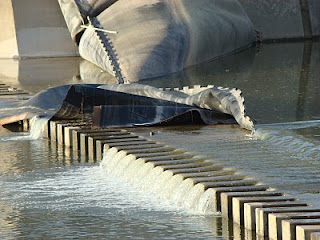 One of the inflatable dams failed allowing the billion give-or-take gallons contained in the lake to follow the gravitationally directed path down river.

heh... I'm just glad I hadn't purchased the annual permit for the Royal SandCastle Yacht. (Seen here in an outing on the "lake" last year) 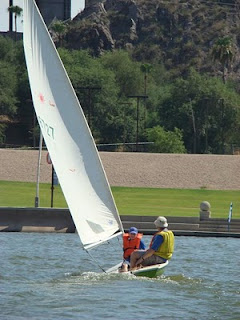 Ides of July 2008 the Green Flag dropped.
The finish line still hasn't popped.
See ya 'round the coming year

Who was it recently said "They raise taxes on the basis of saving police, firefighters & teachers, but when they get the money they buy leather chairs for themselves."
Posted by danno at 18:56 No comments:

A customer decided my presence was required on site post haste. On the downside I loathe airline travel. But on the upside I'll escape the Phoenix heat for a couple days and get in a visit with the SCDad.

Item 1. Remember the 35 foot American flag painted along side the freeway, that CalTrans decided was "graffiti" and painted it over? I'm happy to report it is freshly repainted and surrounded by flags on poles at each corner. I really wish I had a camera to share the sight.

Item 2. TSA was a breeze. No lines, just walk up to the gate officer and then a pick of two scanning lines. I apparently chose poorly and won the random secondary security screening! It was quick and uneventful. I'm wearing a shorts and a T shirt. Not many places to hide anything.

Then one of the TSA guys spoke up saying "Hey you got the bag too!" (pointing ay my NRA "briefcase"). I mentioned I'd heard rumors of NRA members living in the Peoples Republic of Kalifornia. He said there are about eight of them.. They have monthly meetings. We had a short chat as I collected my shoes & bags.

Item 3. File this under "Things I never knew and/or suspected". The SCDad shot at Camp Perry! He said it was an Army match in his ROTC days, probably 50-ish years ago. He mentioned even then it was hallowed ground. He asked if I'd ever shot there. "No but it's on my list of things to do this life". Note to self... make a plan and make it happen!

Looking forward to getting home and finding scope rings & bases in the mail.
Posted by danno at 14:06 No comments:

Soft Green Glow has the June ePostal results and the July contest is up over at Sailor Curt's.
Posted by danno at 23:15 No comments:

From the SandCastle Crew!
Posted by danno at 19:34 No comments:

Well that was fun!

Steel shooting is more fun than punching holes in paper and even more so when shooting with friends. Tonight was a really good time. The SCQueen came along as well and planned for her to participate as well. There was a holster & magazine carriers and enough bullets for the both of us. But for lack of a belt, her gun stayed in the bag.

The CRO's safety briefing was brief and to the point. We are all experienced shooters and there was no need to drag it out.

I hadn't shot steel in quite a while. In fact while getting dressed, I realized this is the first time I'd used the Fobus paddle holster since purchasing it at the NRA convention last year. It *has* been a while.

We did the stages in reverse order and never had to wait for more than a couple minutes before taking our turn. We all made it through our first stage (alternating circles and squares. one hit on the circles, two on the squares). I did ok until I started to rush and that cost me.

Second stage not so much. The stage was three plate racks from three boxes (each squarely in front of the respective rack). Click here for a picture of the stage. Kevin decided it was a good time to practice MALF drills. Then I developed a flinch and wasted a lot of rounds. My plan called for cleaning the first two racks on one magazine (17 round magazine. 12 hits, allowing 5 misses) then switch to a second magazine enroute to the last box. Wrong! I swapped magazines on each transition and ran to slide lock at the end of the 2nd rack.

In all, the stages required (at least for me) careful aim and concentrating on a good grip and trigger squeeze. Carelessness was NOT rewarded. Also there is something about the running timer that adds stress to the situation. We have seen shooters run fine on the normal range but have MALF after MALF once the clock is running. I also decided I don't like the PT-92 grips. They felt "prickly" when I shouldn't even notice them. I'll be shopping for some Hogue's this week.

Shooting Steel, especially at the informal end, is a much more social game than shooting at the range or rifle competitions. It is much more fun like a round of golf and go as a "foursome". There is time to talk while reloading magazines and waiting to take the stage. We all look at the stage and plan our attack.

Anyway you slice it, it's great fun and a really good excuse to disassemble 100 rounds or so [so we can reload them later of course]. Yea it was "warm" (111F on the drugstore thermometer just down the road), but we had a bit of cloud cover and enough wind to keep the personal evap cooler* working.

Same time next week? And we'll take the action item to get the SCQueen a belt so she can play too.

* personal evap cooler = sweating like a pig. The dry air evaporates the water, and latent heat of evaporation takes heat from the skin. It works, but best to pre-hydrate before heading out and keep the water bottle close at hand.
Posted by danno at 21:39 2 comments: