Hope this turns out well...

That covers both possibilities, a good guy successfully defends himself or a bad guy goes to jail having committed murder.

surveillance video ... show a physical confrontation that occurred before the shooting.

Unfortunately the shooter left the scene but apparently doesn't read NotClauswitz who recently reminds up to STFU after a shooting.

I hope this turns out well.

Wonder if he's thought to call a lawyer?

I happened to visit a WallyWorld a couple miles away at approximately the same time.  This caught my eye:

Was the rest of the bicycle stolen?  Who would lock up just a quick release front tire?  More proof a lock is but a polite request to leave it alone?

Approaching the store, local PD had a mid-20's girl up against the car, handcuffed behind her back.

Update 19Feb2014: (From Phoenix ABC15)  Shooter claims he tried to walk away but was grabbed from behind and thrown to the ground.  And while he left the scene, he called local PD from home.

I gotta think surveillance video substantially backs up his story as he has not yet been arrested.  Still DUDE... CALL A LAWYER!  They should be the one talking to the public, not you!

The Stars Came Back

[Author's note:  I thought this went up a month ago.  But apparently not.  Short version:  Go buy Rolf's book.  You'll be glad you did!]

Rolf, the author of "The Stars Came Back" published part over on Joe's place. The story piqued my interest but TL;DR at the time and forgot to check back when I did have time.

A call for proofreaders went out in December and having some experience in proofreading, I volunteered.  Christmas Vacation provided the time to do a proper read.  What the heck..  I'm not getting paid so if it doesn't hold my interest I can always use the "ran out of time" excuse.

I had no inkling of the ride he was about to take me on!  And the editing was far more professional than I'd expected for a self published work.  I had to look hard to find any critiques.

There is a lot of good stuff in there.  Right thinking philosophical stuff, military strategies, etc. I sent it on to the SandCastle Son to read as he is considering a future in the military.  The read includes some good lessons in proper use of military force.

And an ending I never could have imagined!

I hope I was able to help Rolf improve the final product.
Posted by danno at 22:26 No comments:

The SCSon and I headed out after dinner to procure valentines. Crossing a nearby intersection sounded like driving over nuts (pop-pop-pop-pop-pop etc.) Within a few feet the sound changed to a tick-tick-tick that varied with speed. Pulling up at the store, the tire looked like this: 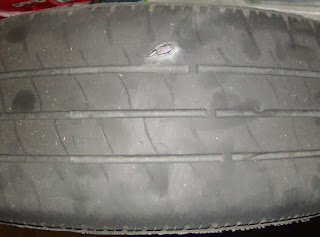 Surprisingly, the tire still held air even after pulling the metal.  Guess it didn't get past the belts.  Still you can see it's down to the wear indicators so it's time to replace anyway.

This tire has run it's last mile.  So far the other tires seem to be unscathed.
Posted by danno at 22:11 No comments:

well that was fun!

The SCSon and I fenced with the club tonight.  We started with the traditional hour of cardio/warm-ups/games/foot work.

Then came the call to SUIT UP!

I was ready in reasonable time and collected a couple other fencers also dressed to start a strip (a strip minimally requires two fencers and a judge).  From there succession rules follow two patterns:  "King of the hill" where the winner stays up until defeated.  Or "two up, two down".

I fenced the first bout against what I would rate a 16yo middle-ish club fencer. To explain further, he 16-ish with a couple years fencing experience.  He beat me 5-3 which sets the expectation for me at the low end of the scale ( 50+, 50# overweight, ~1yr experience)  IOW, I don't feel bad losing to him and thanked him for the bout.

An Olympic contender took my place on the strip and handily whupped the guy that whupped me.   No surprise.

I connected up and explained to the OlyContender..  "You will win this bout, I have no doubt. But I will score 2 touches because of my inexperience.  I will serve up some attacks you will have never seen and you will not expect!".

He scored several (4 or 5) easy touches avoiding my parries to touch my sleeve.  no argument - his points.   But I caught on to his game and scored a couple parry-ripostes.  Final score 10-4.  However while he clearly won the bout, I doubled the predicted 2 touches, I'm happy for the result.  I also hope the bout has some "rope-a-dope" influence on said ringer.  He won but I was truly glad for the bout and enjoyed it immensely!  I truly hope I can stories of  "I fenced him when..."  I also hope to see him win Olympic gold in the next couple rotations!

My strategy, if you can call it that, is the frontal attack!  Six foot, two fifty with a blade on a double advance lunge puts the opponent into the approximate position of standing in the way of a freight train! It works in the short run...  but it's a loser once they catch on.

I then shifted to a different strip to watch the SCSon take on the strip leader.  He won that bout and took on a club noob.  The noob explained his lame (prounced "la-may") had some dead spots which could affect scoring.* The  SCSon however had at least a foot of reach on the noob so said noob didn't have much of a chance.  The SCSon won handily.

Since I'd judged that match, I was the natural challenger to succeed the loser.  The SCSon protested "we're playing two up two down?"   "Nyet  You face me!" I said as I plugged in.  Big Will chimed in "you face him or you face me!"

The final bout of the night was between the SCSon and myself. I tend to play a aggressive game. That works for me in the short term but against me in the long term as exhaustion becomes a factor.

I won the bout but was at my physical limits at the end of the bout.  If he'd been a bit more aggressive, He'd have won.

Fencing is equal parts mind and physical game.  The mind has to take physical limits in to account.  Fresh and energetic?  Play aggressive!  Bit tired?  Play defensive.  But the opponent is expecting that so counter that with....  Fencing is at least as much mental as physical!

This evokes the"cost of wins" question brought up in the movie "Money Ball".  However the currency here is stamina rather than dollars.  "Okay that freight train thing worked for the first 6-8 points,  Those are pretty expensive  maneuvers.  Now you're out of gas.  What are you going to do to make it to 15?

Gawd I love this gam3!

* the noob explained "this is the smallest lame in the closet".  I commiserated "I have the same problem but at the other end of the scale.  ;-)