Hayworth challenges McCain for the Senate!

JD Hayworth closed out his radio show last Friday and made comments over the weekend suggesting he will challenge John McCain for the Senate. I've been collecting my thoughts since then and every time I think about McCain I'd get mad and set it aside.

Today however Great Satan Inc said it very nicely which means now I don't have to. I thank you and my blood pressure thanks you!

John's "My Friends" opening came across like fingernails on a chalkboard and the intonation evoked images of a shark greeting its prey. Four Senate terms and a couple House terms before that is too much already. It's time to retire.
Posted by danno at 20:42 1 comment:

Do you know what happens when you start the tumbler in the evening and forget about it until the next day? The brass comes out really shiny!
Here's the result of about 16 to 18 hours. Some of this brass is recent production, but the .30-06 is Korean war surplus with 50 years of tarnish. It looks nice but I don't think I'll make a habit of such long tumble cycles. 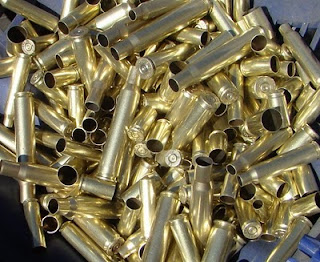 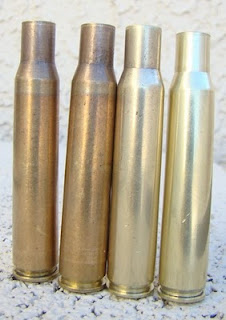 Good day to hit the range

One of the local teams has some sort of big match Saturday. Apparently they had a big send off this AM featuring speeches from all sorts of self important people like the governor, even though she came across as though she'd never watched a single inning in her life.

Normally I wouldn't care one whit. As it says in my intro on the left "I'd rather be doing than watching". But it should be a good day to hit the range.

One of the downsides of an outdoor range is the wait for a cease fire to put out a target. That can mean up to a 20 minute delay from arrival to 1st shot on target. This time of year we have an influx of shooters and the range will be full with 20-40 minute waits for a bench most or all of the day. That can mean an hour delay between arrival to first shot. Shooting is fun, but waiting around is not. Pretty soon the pain of the wait begins to outweigh the fun of the shoot. Saturday looks like a good day to shoot.

I wish them well because if I understand the play off scheme, it's basically a single elimination deal. So if they win, the next match will be the reallly big one and yet another opportune day at the range.

Good luck guys. Your success benefits me too.

If you happen to be at Rio Saturday afternoon, I'll be the one with a Chrony! Stop by and say hello.

Update: It was a good day at the range. "Any open bench" said the RO as I signed in. Haven't heard those words in years.

Returning home I came across the game while surfing the channels. 14-35 Not looking good for the local boys. er scratch that - field goal straighter than my shooting 14-38. Continue surfing. coming back around to the game now 14-45 and it's only in the 3rd quarter. It's like watching a train wreck.

The SCSon cashed in a couple Christmas gift cards tonight and came home with a "Nerf N-Strike Recon CS-6". This is a caliber .50, magazine fed, removable stock, changeable barrel with rails top and bottom, lights and sights. It even has a "shoulder thing that goes up". [insert your own grunt sound effect here]

He opened it up and started having fun swapping parts around... like any of us and our AR pattern rifles. In typical free association mode he asked "Hey dad... how long would it take to set up that speed sensor thing". 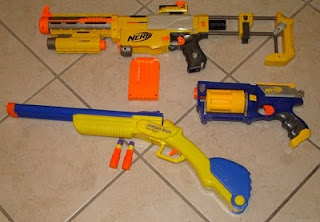 Hmmmm I smell a teaching opportunity in the best Mythbusters/James May kindof way. The chronograph only took a few minutes to set up, but it took far longer to take the data not only from the new acquisition but from the rest of the Nerf collection. That includes the CS-6 at top, a double barrel shot gun lower left and a six shooter on the right. We took 10 velocities from each gun. times 2 for the CS-6, once as a rifle and once as a pistol to see what difference the barrel extension made. 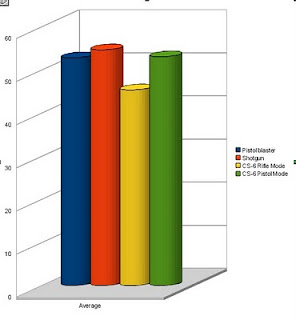 The data shows a couple surprises. Firstly the average velocity for all three guns was just over 50fps (three over, one under). This is likely because they all are powered by the same basic mechanism - a spring powered air pump. This is similar to AirSoft pistols.

Next surprise is that the difference between the CS-6 as a rifle and as a pistol. Velocities were 17% higher for the pistol than the rifle which might mean the extra barrel length actually slows the dart. However the rifle was more consistent with it's velocities showing a standard diviation was about 32% lower with the rifle barrel installed.

Finally the shotgun had the highest speeds both average and single shot - nearly 78 fps. But it also was the least consistent with a range on nearly 44fps. It's probably a combination of leakage between the air pump and dart, and how many times the dart bangs its way down the inside of the barrel.

Here is the raw data for the sake of completeness: 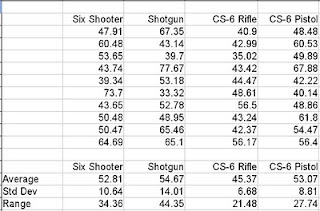 What's it all mean? Abso-fraking-lutely nothing! THESE ARE TOYS! But it was an excuse to pull out the tools and run the data. And sometimes "Because we can" is reason enough. 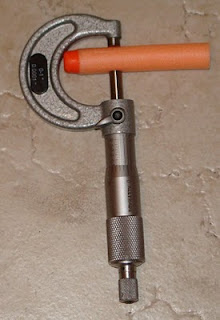 "Nerf" is a registered trademark of the Hasbro company.
Posted by danno at 22:04 No comments: