I avoided the local range over the weekend figuring it'd be SRO with all the long boxes under the tree as suggested by recent NICS data (H/T SIH). I held off until today when I calculated at least some percentage would have to be back at work.

No such luck. There was one ahead of me for a bench when I arrived. Ok, not bad. When I left an hour later, there was 20-30 shooters waiting.

Anyway today's mission was to shoot the Winter GBRM. While I had two lucky shots with the SKS, the total score (100 out of 300 possible) was pretty low. I couldn't figure out the commie sling there at the bench. However sitting at home the function seems obvious. I think I can do better and have ~10 weeks left to try (Hint hint... that's also how much time you have to get your entries in!) 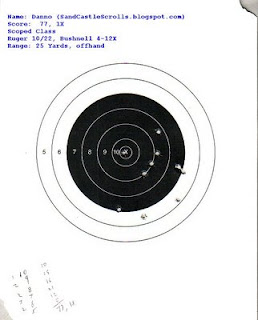 I also brought out the 10/22 and will submit this entry. I suck big time offhand, and a sling would undoubtedly help. But here is what I shot today. Actually this is the best of my two attempts. Score: 77, 1X
Posted by danno at 23:06