The daily agenda was clear at the SandCastle. We decided to take a ride down town on the new Phoenix Light Rail. It opened on Dec27th and was free through the end of the year. 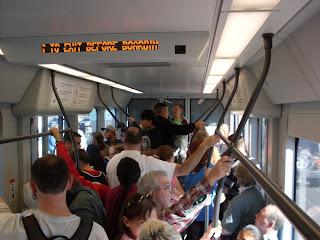 The idea was hardly original however as the picture shows. Pretty much sardine can mode. I looked around for a "Maximum Occupancy" sign but never found one.

Most of the riders seemed just out for a joy ride. This was confirmed on the return trip as one traveler said they rode to the far end of the line. Their plan was to get off, wander around there and then ride back. However seeing the lines to get on at the far end they kept their seats and rode on back.

We got off in downtown Phoenix and found a place for lunch. Then walked a block south to a rail stop for the trip back to our car. The outbound train seemed late and the SCSon was getting antsy. I speculated the train might have had an accident with a car. Turns out I may have been right. This occurred just about the time we were headed home and just upstream of our rail spot.

A couple moms with their brood of 5 kids pushed their way on a couple stops later. The three boys (est age 6-7) found an otherwise unused square foot on the floor under some seats. They reported it was also cooler down there. One of the moms noted all the bars and restaurants along the route in Tempe and speculated aloud on the bar hopping possibilities. But the Police have thought about that too and already have plans to stake out the park and ride lots, just waiting to pick up the DUIs.
Posted by danno at 18:08